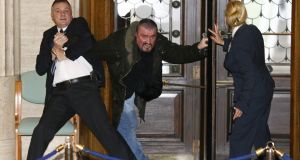 Jailed loyalist killer Michael Stone’s bid to be freed early for a second time under the terms of the Belfast Agreement has been put on hold, Belfast’s High Court has heard.

The Milltown Cemetery bomber claims he should be released again because he would not pose a danger to the public.

A panel of Sentence Review Commissioners was due to consider his case and give a preliminary decision by today.

But a judge was told they are now seeking clarification from the Northern Ireland Office on a number of issues before reconvening to assess Stone’s application on June 24th.

The development came in a legal challenge brought by the sister of one of Stone’s victims. Deborah McGuinness’s brother, Thomas McErlean, was among three mourners murdered in the grenade attack on an IRA funeral at Milltown in west Belfast in March 1988. She is seeking a ruling that the loyalist does not have the legal right to mount another attempt to get out of prison.

Counsel for Ms McGuinness, Ronan Lavery QC, argued: “The Commissioners have no jurisdiction whatever.”

Stone (64), is currently serving a 30-year prison sentence for waging a sectarian murder campaign. As well as the cemetery attack which claimed the lives of Mr McErlean, John Murray and Kevin Brady, he was also the gunman in three other killings.

Milkman Patrick Brady was murdered in south Belfast in November 1984, 12 months before joiner Kevin McPolin was shot in the head in Lisburn, Co Antrim.

In May 1987, Dermott Hackett was found dead in his van between Drumquin and Omagh. He had been shot up to 16 times with a submachine gun.

Stone was originally freed early in 2000 as part of arrangements in the Belfast Agreement.

Six years later, however, he was returned to jail after trying to enter Parliament Buildings at Stormont, armed with explosives, knives and an axe, in an attempt to murder Sinn Féin leaders Gerry Adams and Martin McGuinness.

He denied it had been a bid to kill the politicians, instead claiming it was an act of performance art.

Earlier this year, the High Court held that Stone’s tariff means he is not eligible for release until 2024 — thwarting his plans at that stage to go before the Parole Commissioners.

The ex-UDA man is now attempting to secure an alternative route out of jail through a Sentence Review Commissioners hearing.

His lawyers confirmed that he wants them to direct his release again under the Belfast Agreement.

Ms McGuinness’s lawyers sought an emergency order to stop the body from considering his application.

In court on Friday Mr Justice McCloskey was told the commissioners believe they have jurisdiction to assess Stone’s case. They are now expected to give a preliminary indication by the end of the month.