Gun violence has ‘no place in our society’, funeral told

Sean Little died ‘in the most horrific, barbaric, senseless act of violence imaginable’ 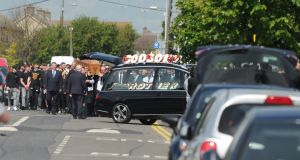 The gun violence that claimed the life of 22-year-old Dubliner Sean Little last month has no place in Irish society, the priest at his funeral has said.

Fr Denis Darby told a very large congregation at the funeral service in north Dublin the dead man’s family and friends had been left devastated by the killing, near Walshestown in north Co Dublin on the night of May 21st.

“Sean lost his life in the most horrific, barbaric, senseless act of violence imaginable; an act that has no justification and no place in our society,” Fr Derby said.

“(It was) an act that goes against all Christian values, one that has left his family absolutely devastated and our parish community feeling very vulnerable, extremely numb and saddened.”

However, there were no gang trappings at the funeral service at St Luke the Evangelist Church in Kilmore West, something Archbishop of Dublin Diarmuid Martin said would no longer be facilitated by the Catholic Church.

Gardai maintained a visible but low-key presence around the church. However, while uniform gardai on foot were posted around the environs of the church, members of the Public Order Unit, or riot squad, were parked in Garda vans out of sight on streets just away from the church.

There was also a Garda armed presence in the area, according to sources, thought it was not visible.

“Sean was very loved in his family,” Fr Darby told this gathered for the funeral service, a congregation made up of hundreds of people.

“(He was) a young man who always expressed his love for his parents, siblings, extended family and friends. A young man who brought happiness to his family.

“They were always extremely proud of him. Sean was always there for his family. They were his life and he was their life. He was reared here in St Luke’s and was always proud to call Kilmore West his home.

“Only a number of weeks ago Sean was here in church with us to celebrate his niece’s Confirmation Day. It is difficult to comprehend that we gather this morning on this very sad occasion to offer his young soul into the love and kindness of God.”

A friend of Little’s, introduced to the congregation as Brandon, said the deceased was his best friend and had been a fun-loving man who was immensely proud of his family, especially his mother Bernie “who he never stopped talking about”.

He told Little’s family “keep yizzer heads up”, telling them the dead man’s many friends would help them through their grief.

During the service a number of gifts were offered up representing Little’s life; his mountain walking hat and sticks, a jar of Astral moisturising cream, a photograph of the deceased with his mother and a drawing by his young niece.

Little is survived by parents Bernie and Stephen and brothers Darren and Jonathan and grandmother Pauline.

In the period before his death, Little knew his life was in danger and had at times begun wearing a bullet proof vest.

However, on the night he died, he drove up the M1 and exited the motorway close to Walshestown where gardaí believe he went to meet someone he knew and trusted but who turned on him and shot him dead.

The following day a friend of Little, 22-year-old Jordan Davis, was shot dead close to his home in Darndale, north Dublin, while wheeling his son aged four months in a push chair.

On May 28th, Hamid Sanambar (41) was on his way to his way to the Little family home when he was shot dead outside the house.

Another friend of Little’s, Zach Parker (23), was shot dead in Swords, north Co Dublin, in January.