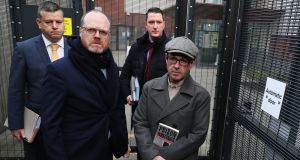 The PSNI decision to extend the bail of journalists Trevor Birney and Barry McCaffrey rather than end the case against them has been described as a “travesty of justice” by the head of the National Union of Journalists in Ireland (NUJ).

Birney and McCaffrey handed themselves in to Musgrave Street PSNI station in central Belfast on Friday at noon for further questioning in relation to the alleged theft of a document relating to the Loughinisland killings.

Mr Dooley, along with Birney’s and McCaffrey’s respective solicitors, Niall Murphy and John Finucane, called for the action against them to be terminated. Instead they were released on Friday afternoon on extended bail to be returned for further questioning on March 1st.

“We had naively hoped that the PSNI would lift the threat of prosecution against Trevor Birney and Barry McCaffrey,” said NUJ head Seamus Dooley.

“The decision to extend bail until March 1st is a continued threat to the liberty of two investigative journalists. The NUJ is renewing our call to the Tánaiste and Minister for Foreign Affairs, Simon Coveney, to intervene on this issue,” he added.

“The rights of Trevor and Barry, under international law and under the Good Friday agreement, are clearly undermined by their treatment at the hands of the PSNI and Durham Constabulary, ” said Mr Dooley.

He said it was “an extraordinarily important day for press freedom” in Northern Ireland. “But more importantly, it’s about the Loughinisland families,” he added.

“Our message as working journalists and trade unionists is very simple: stop the fishing and find the killers,” added Mr Dooley. “That’s our message. This is a fishing expedition; get it over with.”

Birney said on his release that “ultimately I think that today has just been a complete farce”.

“I think this is quite clearly punitive and an attempt to try to restrict both myself and Barry and the work that we are trying to do,” he added.

Birney said the focus should be on the Loughinisland families. “But I think this farce today has just added to their grief and added to their concern that they are like corks on the ocean being bobbed about by police forces both here and in Durham,” he said.

His solicitor Niall Murphy said he had expected the case to be dropped on Friday. “This is a malicious farce conditioned by a paranoid hysteria in the senior ranks of the police,” he claimed.

In a major police operation led by Durham Constabulary, the two journalists were arrested at their homes and their offices searched in August this year in relation to a documentary about the Loughinisland killings, No Stone Unturned, which they were involving in making .

Six men were killed in that 1994 Ulster Volunteer Force attack at the Heights Bar in Loughinisland, Co Down, as they watched a World Cup game between the Republic of Ireland and Italy on television.

Birney and McCaffrey were not charged but were subject to bail conditions and instructed to report to police for further questioning.

A group of about 50 journalists, led by Mr Dooley, staged a protest against the arrests outside Musgrave Street station as Birney and McCaffrey arrived for questioning.

Solicitor Mr Murphy referred to a dispute between Durham Constabulary and the North’s police ombudsman, Dr Michael Maguire, over the events relating to the arrests of the journalists.

Despite contrary claims from Durham police, Dr Maguire said his office had not made a complaint that documents featuring in No Stone Unturned were stolen from his office.

Durham Constabulary then stood by its statement that it was acting on foot of a complaint from the ombudsman’s office. Dr Maguire in turn stated, “We stand very much behind the statement we issued to The Irish Times: we did not report a theft.”

Mr Murphy, citing the ombudsman’s stance, said police should end the “ordeal” of the journalists. “It has been clarified there is no statement of complaint,” he said.

Mr Finucane, solicitor for McCaffrey, said, “I think what the police tried to do with the arrests of Barry and Trevor was to send out a very chilling message to journalists.”

On Thursday, Belfast High Court rejected claims that the Police ombudsman exceeded his legal powers in publishing findings on the Loughinisland massacre, which identified RUC collusion with loyalists who murdered six Catholic men in the Heights Bar.

Amnesty’s Northern Ireland director Patrick Corrigan said “journalists must be free to investigate and expose issues of public concern without fear of arrest”.