Lidl in Dublin looted and smashed on Friday night

Two other stores also attacked in Citywest, gardaí have made arrests 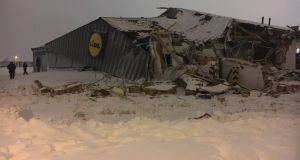 The Lidl supermarket on Fortunestown Lane in west Dublin, after it was looted and vandalised with a digger. Photograph: Chai Brady /PA Wire

Nine people were arrested by gardaí in Tallaght, west Dublin on Friday night after a Lidl store was looted during Storm Emma.

A large digger was used to break into the building. Its bucket was repeatedly rammed onto the roof, causing it to partially collapse.

There were also reports of at least one pharmacy in the area being looted by men who gained access using sledge hammers.

The Garda’s efforts to get to the scene were complicated by large snow drifts on some of the access roads. There were also reports that boulders of snow had been rolled across roads in an apparent effort to block vehicles from reaching the area where the Lidl store was located.

The Defence Forces was called into action under its “aid to the civil power” function. It supplied vehicles capable of getting large numbers of gardaí into the area despite the poor condition of the roads.

Uniformed gardaí as well as armed detectives and the Public Order Unit were called into the area in a bid to restore order.

There were reports locally of a fire at the Lidl store and Dublin Fire Brigade dispatched three fire tenders. However, no fire was found and reports of it were confirmed to be false.

Gardaí were on Friday night trying to establish the identity of the person operating the digger and whether the looting was orchestrated. Initial reports from witnesses suggested a group over more than 20 people had broken into the Lidl shop and looted it before the digger was then used to repeatedly ram the building.

Gardaí are operating on the theory that some of the looters found a safe and it was taken outside into the snow using the digger, before the bucket was repeatedly smashed on it in an attempt to open it.

Lidl Ireland said it was aware of the “very serious incident” at its Fortunestown Lane store.

“Given that the incident is now the subject of a criminal investigation we are not in a position to comment further at this time,” the company said.

Local Fine Gael Councillor Brian Lawlor said a group of young men allegedly broke into the Lidl store, which had been closed during the storm, at around 4pm.

“A gang of young men broke in, robbed the store and smashed it up as well. It is very disappointing that shop was looted at a time when emergency services are so busy,” he said.

“The looters robbed all types of alcohol from the shop and then smashed the place up too causing possibly thousands of euro worth of damage,” said Mr Lawlor.

He described the incident as “a very cynical move by the gang”.

“Emergency services and gardaí were very busy today dealing with all the post storm incidents and with abandoned cars up in Tallaght and other areas of south Dublin,” he said.

“I would like to condemn in the strongest terms, the actions of the gang who targeted Lidl today and for putting a strain of the stretched resources of gardaí and emergency services during the worst weather the country has seen,” he said.

“Great community spirit has been shown in Tallaght over the past few days and the disgraceful actions of a very small minority are not representative of the great community here,” said Mr King.

“I absolutely condemn wholeheartedly the robbery and subsequent damage done to the store. Tallaght has been very badly hit by the severe weather and emergency services and gardaí should not have to deal with type of criminal activity at the height of a weather crisis.”

He said local people he had spoken to in Tallaght were “so angry at what has been carried out”.

“The mindless destruction of the shop is an absolute disgrace.”