Only 4% of child sex abuse cases result in court conviction 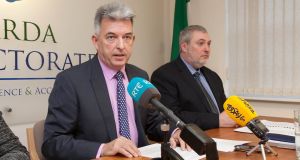 Only 4 per cent of child sex abuse cases reported to the gardaí resulted in a conviction in court, the Garda Inspectorate has found in a sample study.

It also found some 66 per cent of all sex crimes in Ireland involved a child victim.

In a mostly damning report, published yesterday, the inspectorate noted an exponential increase in internet-based offending and dangers to children from social media since its first review in 2012.

The inspectorate has also concluded that too few gardaí were deployed in trying to catch child abusers grooming and exploiting children online.

It pointed to the recent establishment of the Garda National Protective Services Bureau units as a crucial step forward.

These, it said, had “the potential to address many . . . areas of concern found during the review”.

However, that finding was contained in a report that set out a rapidly growing child sex abuse and exploitation crisis as the Garda struggled with even basic problems.

For example, the inspectorate said all computers, phones and other devices that were seized because they were believed to contain images of child sex abuse and exploitation were sent to the Garda Cyber Crime Bureau for analysis.

But it had access to only poor strength broadband, with videos that should download in 30 minutes taking 12 hours.

Garda Headquarters welcomed the report, saying it identified some positive reforms, including the National Protective Services Bureau, that were already under way.

These would reform Garda practices and resourcing in line with the inspectorate’s recommendation.

These included the urgent roll-out of Garda divisional protective services bureaus by the end of the year. Child victims could be medically examined, interviewed, counselled and supported in one centre staffed by trained professionals from the Garda and Tusla.

Minister for Justice Charlie Flanagan said an independently chaired cross-sectoral implementation group was being established to ensure the report was acted on. It would be chaired by Caroline Biggs SC, he said.

The Garda Inspectorate is an oversight agency. It reviews areas of the Garda’s work and recommends reforms. It reviewed the force’s approach to child sexual abuse in a 2012 report and issued an updated study of the same subject yesterday.

With some 66 per cent of all reported sex crimes in Ireland involving a child victim, in those cases 44 per cent of perpetrators were family members, 25 per cent were neighbours or family acquaintances and 14 per cent strangers. Clerical abuse was now statistically negligible.

In a sample of sex crime cases where the offender was under 18, some 17 per cent received a Garda caution. Informal and formal cautions were used in some cases for very serious crimes, including in 11 rape cases.

It also found a gap in legislation which meant the Garda does not have the power to compel the owner of a computer to provide the password so it could be searched for illegal images.

It was unclear what powers the Garda had, if any, to enter the home of a sex offender who should be under surveillance post prison release but who refused to answer their door to gardaí calling to check on them.

The relationships between the Garda and Tusla were “inefficient”, the inspectorate found. Often, important meetings to discuss cases were not held.