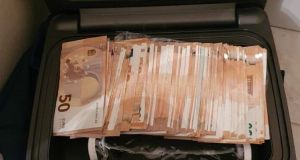 The Criminal Assets Bureau (Cab) has seized drugs, cash and other assets during searches of five properties in an operation targeting a Co Louth drugs gang.

The Irish Times understands the criminals targeted have been very involved in drug dealing in Dundalk for some years.

The Cab operation on Tuesday was not connected to the Drogheda feud, which has resulted in gun attacks between two factions based mainly in the Co Louth town over the past 2½ years. Instead, Tuesday’s operation focused on a drugs gang operating in Dundalk, all of whom live close to each other in the town.

A total of five properties were searched on Tuesday including four residential addresses in Dundalk.

The fifth property raided was the offices of a company that has provided some of the criminals with professional services and that search was carried out with a view to seizing financial documents and other records related to property transactions.

The searches were carried out early on Tuesday morning by detectives from the Cab backed by members of the armed Emergency Response Unit, gardaí from the Louth Division and the Garda Dog Unit.

Gardaí seized cocaine valued at about €35,000 along with a Ford Kuga, a Nissan X-Trail and €16,600 in cash. Cab said the search operation was a significant juncture in its ongoing joint operation with gardaí based in the Louth division into the specific gang. “Over the course of this on-going investigation €62,650 in cash believed to be the proceeds of crime has previously been seized,” a statement said.

Members of the gang have been suspected of weapons offences as well as drug dealing.