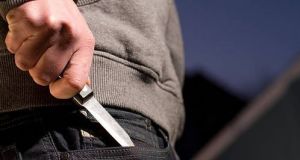 There are concerns Ireland could face more knife crime following figures showing a 66 per cent increase in knife seizures since 2016.

Garda sources said the vast majority of these knives were seized from young people during stop-and-search operations.

“This clearly shows a lot more young people are carrying knives. And these knives are obviously being seized because gardaí believed they were for criminal purposes,” said Fianna Fáil justice spokesman Jim O’Callaghan, who obtained the figures.

He said he was concerned Ireland could be going down the same road as London which recorded over 40 knife crimes a day throughout 2018.

“Obviously Ireland is different to London, but there’s a tendency for crime trends to be repeated in Ireland once they start in Britain. We have to ensure we do not allow knife crime to become a problem in the same way that it has in the UK.

“That involves spending resources on it now. Part of the reason there is a big knife problem in the UK is a reduction of police officers and community police officers.”

Gardaí said many young people were carrying knives because they were in fear of being attacked over drug debts or as part of minor feuds. However, it is thought at least some of the rise is down to increased Garda numbers and more stop and searches.

Mr O’Callaghan said there needed to be education for young people on the consequences of carrying knives.

Two gardaí posted to Americas to tackle international crime and terrorists 16:46
Army officers evacuated from Goma after weeks of delay 16:43
Robberies from homes down 60% due to pandemic 15:57
Changes to Covid-19 payments to be considered next week, Minister says 15:29
Warm, dry spell may prompt hosepipe ban, says Irish Water 14:48