Cannabis grass and cocaine with a combined estimated street value of €320,000 seized 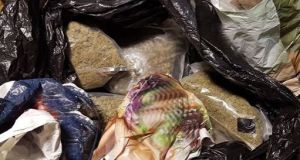 The drugs which were seized. Photograph: An Garda Síochána

Over €300,000 worth of drugs and a firearm have been seized after searches in Co Galway.

The operation by the divisional drug unit in Galway assisted by local gardaí in Loughrea was aimed at targeting organised crime in the east of the county. Officers searched a house, aided by the dog unit, in east Galway on Thursday morning.

During the course of the search, cannabis grass and cocaine with a combined estimated street value of €320,000 was seized, along with a firearm.

Two men, in their 20s and 40s, were arrested at the scene in connection with the seizures and both have been detained at Galway Garda Station on suspicion of drug offences.