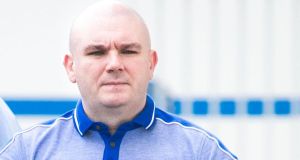 Kieran Collopy: coming to the end of an eight-year prison sentence for drug dealing.

A major crime gang targeted across three counties on Wednesday is led by two men set for release from jail in coming months and was also involved a decade-long feud in Limerick with the McCarthy-Dundon gang.

Members of the Keane-Collopy gang were targeted by more than 200 Garda members and Defence Forces personnel, including the Army helicopter, in raids at 67 private homes, businesses and lands in Limerick, Clare and Tipperary.

Operation Coronation, which was established to tackle the gang, resulted in Wednesday’s Garda raids with two cocaine presses seized as well as approximately €220,000 in cash including some sterling and UAE dirham as well as Irish punts. One vehicle, valued at €50,000, was seized along with jewellery and watches valued €100,000; the deeds to a property in Dubai; financial documents; €23,500 in cannabis, heroin and cocaine. And €119,000 was frozen in two bank accounts. The gang is comprised of older men, in their 30s and 40s, who were part of the gang during the Limerick feud as well as a group of young men who have come of age since the feud ended almost 10 years ago.

One of its former leaders, Kieran Keane (36), was shot dead by the McCarthy-Dundon gang in January 2013, in a killing that sparked the lengthy feud.

Two of its key members are coming to the end of eight-year prison sentences for drug dealing: Kieran Collopy (44) of St Ita’s Street, St Mary’s Park; and Brian Collopy (47) of Kilonan, Ballysimon.

At their sentencing in July 2016, Limerick Circuit Court heard the men were at the “top end of the drugs pyramid” in Limerick city.

Brian Collopy had been released from prison just 11 months before he was arrested in connection with the €40,000 heroin haul he is currently serving eight years for. He had travelled to Europe once each month, for about a week each time, for suspected drugs trafficking business in the 11 months he was at liberty.

Brian Collopy has also survived attempts on his life, though he has suffered gunshot wounds, and had his house in Limerick seized by Cab as part of a near-€500,000 settlement.

He had previously been jailed for six years in 2011 for threatening to kill Willie Moran, a former criminal associate of the seven Collopy brothers who was due to give evidence against two of them in a court case.

Kieran Collopy and Damien Collopy were each jailed for five years in 2011 for threatening Mr Moran.

Vincent Collopy (40) was extradited from Bulgaria and also jailed for three years in 2016 for threatening Mr Moran.

Another brother, Philip Collopy (29), shot himself in the head with a Glock pistol in 2009 while teaching younger men how to use it and died from his injuries. He had also been involved in the murder of a former associate and enforcer Eddie Ryan, who was shot dead in the Moose Bar in Limerick city in November 2000.

A seventh brother, Kenneth Collopy (29), Killonan, Ballysimon, was jailed for life for the murder of Daniel Fitzgerald (25) in Limerick in 2009.