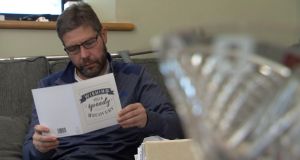 Cross-Border crime such as the attack on businessman Kevin Lunney could be tackled with another North-South body focused on policing, former Fianna Fáil minister for justice Dermot Ahern has suggested.

Mr Ahern said the challenge of policing and prosecuting crimes committed on both sides of the Border “could be looked at” in the context of another cross-Border body under the 1998 Belfast Agreement.

The former minister for foreign affairs said the “thorny issue” of policing was not dealt with until the 2006 St Andrews Agreement, which he helped negotiate, that restored power-sharing in Northern Ireland.

He said a seventh cross-Border body on policing was “not seen as much of a necessity” then, but the idea of a joint task force between the Garda Síochána and the Police Service of Northern Ireland (PSNI) might now be considered.

“It might have legal and constitutional implications that would have to be looked at very carefully. It would be very complex because of all the jurisdictional issues about who prosecutes who and extradition.”

He said the “political vacuum” left by the absence of a governing executive in Northern Ireland and the uncertainty caused by Brexit also did not help the issue of addressing crime at a cross-Border level.

The former Fianna Fáil TD’s suggestion follows a call by Quinn Industrial Holdings (QIH) for the “urgent establishment of a dedicated special cross-Border, highly resourced task force” to prevent further attacks on Mr Lunney and other directors of the Cavan/Fermanagh-based business.

Taoiseach Leo Varadkar has not ruled out a joint Garda-PSNI agency, but said it could take a long time to establish, He has said a joint investigation by the two police forces “can be done quickly”. He has asked the Garda Commissioner to examine the practicalities of this.

There is renewed focus on the investigation into Mr Lunney’s attack following his graphic recounting of his September 17th kidnapping and torture by a gang in his first television interview since the incident.

Reacting to the interview on BBC Northern Ireland’s Spotlight programme broadcast on Tuesday night, Mr Lunney’s brother Tony, another QIH executive, said they would only find comfort when the people who carried out the attack were “apprehended, convicted and put away”.

QIH chief executive Liam McCaffrey said that while he was aware of some details of the gruesome attack on his long-time colleague, the interview brought back “all the horror in one fell swoop” .

Mr Martin said the attack had left a “omertà-type atmosphere” in the area and that “people feel afraid”.

The “rule of the State” did not operate in the area, he said, and ordinary policing would not resolve the problem. Instead there was a need for a new cross-Border group to deal with the “exceptional criminals” behind the attacks.

Mr Ahern, a former Louth TD who represented the Border county for almost 25 years, said “the level of lawlessness” along the Border should not come as a surprise given the “pretty stark” reduction in the number of gardaí and Garda stations over recent years and the removal of a hard border.

He said criminals were able “to go back and forth with some impunity” despite North-South co-operation on policing.

“While you will always hear that there is greater co-operation, at the end of the day they are two separate forces and they cannot go into the other side.”