How women dress or behave not relevant to consent, says Law Reform Commission 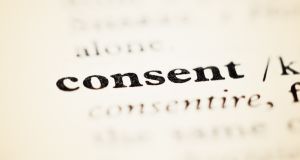 The commission said the defence that a man ‘honestly believed’ the woman had consented, even if that belief was unreasonable, should be replaced

What women wear “is clearly not relevant to consent” in rape cases, but significant challenges remain with how some members of society view the issue, the Law Reform Commission has said.

The commission, which gives the Government advice on legislative reform, said in a report published on Friday that it welcomed the increased discussion about consent in Ireland.

It said misconceptions about rape make it more difficult to prosecute rapists, and may affect the judgement of those involved in the criminal justice process.

The report, Knowledge and Belief Concerning Consent in Rape Law, is focused on the law governing a man accused of raping a woman who claims he honestly believed she consented to sexual intercourse.

It recommended that the “honest belief” law be changed to make the test involved less subjective, and more objective.

The commission also considers the idea of rape myths and the relatively low number of rapes that are reported and go to trial, matters which it says form a backdrop to the issue addressed in its report.

These myths and stereotypes tend to be held more by men than women, by older rather than younger men, and by people with misogynistic beliefs, it said.

At the root of many of these assumptions may be a “safety myth” that the world is a safe place and that if bad things happen to people it must be at least partially their own fault.

This in turn can lead to a focus on a complainant’s behaviour as the root cause of a rape or sexual assault, such as what she was wearing or whether she was drinking.

The commission noted “there was widespread criticism of a reference by a defence counsel in Cork in November 2018 to the type of underwear worn by the complainant”.

Other myths mentioned by the commission are that rape needs to involve additional violence, that the perpetrator is normally a stranger, and that it usually happens in a public place.

It is clear from studies that while false allegations of rape occur, they are rare and no more common than with other offences. The commission said it believes the law as it stands is fully capable of addressing the small number of false rape allegations.

The commission considered whether a new, lesser offence of “gross negligence rape” should be introduced for cases where the man had an honest, but unreasonable belief that the woman had consented.

It decided that while a new, lesser law might increase the number of rape convictions, the harm to the victim was identical whether she was raped negligently or otherwise, and so a lesser crime should not, on principle, be introduced.

It said the defence that a man “honestly believed” the woman had consented, even if that belief was unreasonable, should be replaced. The law as it stood could allow for the acquittal of an accused who had “not given any thought whatsoever as to whether the complainant was consenting”.

It added: “For a relatively minor amount of effort, a significant amount of harm could be avoided prior to engaging in sexual intercourse.”

Under the proposed new objective test, the jury could have regard to any “steps” the man took, if any, to ascertain whether the woman was consenting. However, it was not proposed that a man must take steps in order to have a reasonable belief.

Last year the Department of Justice and Equality established a review of the investigation and prosecution of sexual offences, which is aimed at improving the environment for the reporting of rape.

“A large volume of submissions were received and consultations have taken place with a number of stakeholders on this complex and sensitive area of law,” a spokesman for the department said. “The review is expected to be completed by the end of the year.”