Jim Carrey will not face trial over Cathriona White death 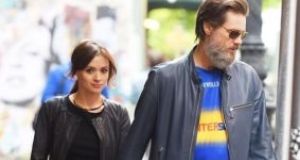 Actor Jim Carrey will not face trial over the death of his former Irish girlfriend, Cathriona White, as the case has been dismissed by a Californian court.

Carrey had been facing a wrongful death lawsuit following the 2015 death of Ms White, who was from Co Tipperary. Her death was ruled a suicide.

The case against Carrey was dismissed on January 25th, according to the website of the Superior Court of Los Angeles County.

Carrey’s attorneys did not immediately reply to multiple requests for comment.

Ms White’s husband, Mark Burton, and her mother, Brigid Sweetman, had sued Carrey in 2016, claiming he was responsible for Ms White’s death by drug overdose after he allegedly provided the drugs to her.

Carrey and Ms White had been dating for three years prior to her death.

“She was a truly kind and delicate Irish flower, too sensitive for this soil, to whom loving and being loved was all that sparkled,” Carrey told local media at the time of her death.

After Ms White’s death, it was revealed that she had been married to Mr Burton since 2013.