Islamic State suspect captured in Syria was radicalised in Ireland

At least five others were recruited by same figure to fight in Middle East, gardaí believe 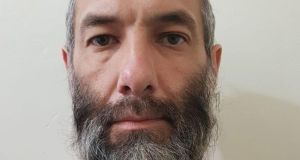 In 2013, Alexandr Ruzmatovich Bekmirzaev left Ireland for the Middle East, where it is understood he joined a group linked to Islamic State.

A suspected Islamic State terrorist captured in Syria was radicalised in Ireland by a Jordanian man who gardaí believe recruited at least five other people to fight in the Middle East.

Alexandr Ruzmatovich Bekmirzaev (45), who is originally from Minsk in Belarus, came to Ireland in the early 2000s and obtained Irish citizenship and an Irish passport.

He worked in retail and as a security guard in Dublin during his time here, sources said, and was on a Garda watch list prior to his leaving the State.

Officers from the Special Detective Unit (SDU) began watching Bekmirzaev after he was observed associating with known Islamic extremists including a Jordanian man who was later described in court as Ireland’s “foremost organiser and facilitator of travel by extremists prepared to undertake violent action”.

The Jordanian man, who cannot be named due to a court order, was deported from Ireland to his native country in 2016. The State alleged in the High Court that he was the “main recruiter” for Islamic State in Ireland.

The SDU believed the Jordanian had recruited “a significant number of people” to the Islamic State cause and had helped at least five, mostly young men, to travel to Syria and Iraq to fight for the terrorist group, sources said.

In an appeal against his deportation, the man denied that he consulted with violent extremist leaders outside Ireland, represented a threat to national security or had recruited for Islamic extremist groups.

Bekmirzaev came to Ireland in the early 2000s and married a non-Irish national while living in Dublin. The couple had a child, who is an Irish citizen. The wife, who is not from the Middle East, and the child left Ireland soon after Bekmirzaev in 2013.

In 2011, while living at an address in Dublin’s north inner city, Bekmirzaev registered a business name for a grocery shop on Talbot Street. The shop is no longer in business and other traders on the street had no memory of it or of Bekmirzaev.

He became a naturalised citizen in February 2010 after applying for a certificate of naturalisation.

While he was in the State, Bekmirzaev was put on a watch list and monitored by members of the SDU due to his associations with Islamic extremists.

A Garda spokesman said that it was after he had been naturalised that Bekmirzaev came to their attention.

It is unclear if Bekmirzaev can be stripped of his Irish citizenship if the allegations against him are proven. Patricia Brazil, a barrister specialising in immigration law, suggested it was unlikely under the current legislation.

The Minister has the right to revoke a certificate of naturalisation in certain narrow circumstances including if it was obtained through fraud or if the person lied about “being of good character” when applying, Ms Brazil said.

Revocation of citizenship is extremely rare. Between 2002 and 2012, no one had their certificate revoked.

However, the State recently applied to revoke the citizenship of several people for lying on their application forms. One of those revocations is currently being challenged in the High Court.

Ms Brazil said the issue was likely to come under the spotlight in Ireland given the Bekmirzaev case. Several other western countries, including the UK, have introduced laws allowing the government to revoke citizenship for naturalised immigrants if they engage in terrorism.

“But for the moment we’re following the trend rather than being ahead of it. Our law isn’t at all as strict as other EU countries,” she added.

In 2013, Bekmirzaev left for the Middle East on his own where it is understood he joined a group linked to Islamic State, also known as Isis. He made his way to Syria, where he fought in the civil war there which has to date claimed almost 400,000 lives.

On December 30th last he was captured by the Kurdish-led Syrian Democratic Forces (SDF), a US-backed militia fighting the remnants of Islamic State.

The Department of Justice has previously estimated that about 50 Irish citizens have travelled to Syria to fight in its civil war, many of them for extremist groups such as Islamic State. At least three have been killed in the fighting.

In a statement, the SDF said Islamic State terrorists had attempted several attacks on its forces recently.

“In this context, a group of terrorists who had been preparing to attack the civilians who were trying to get out of the war zone in masses was detected.

“Following long-term technical and physical follow-up, an operation against the cell was carried out by our forces. As a result of the operation, five terrorists originally from the United States, Ireland and Pakistan were captured.”