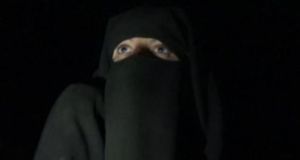 Lisa Smith, an Irish woman who travelled to join Islamic State, has denied taking part in military activities while in Syria.

In her third interview with a journalist since fleeing the town of Baghouz in northern Syria, the final significant stronghold of Islamic State, Ms Smith told the Irish Mail on Sunday newspaper she did not take part in training with the organisation, despite her previous role in the Irish Defence Forces.

Ms Smith, from Dundalk, Co Louth, served in the Army and Air Corps before converting to Islam and travelling to Syria several years ago. She said while in Syria she married a British man named Sajid Aslam, who was killed several months ago.

“For me, I want to go back to my country,” she told the newspaper. “[As] for why? Obviously the people are good, you know, and they treat you right and they smile at you, you know.

The Irish Government has said Ms Smith and her child will be allowed return home and that it was examining ways to get them out of Syria.

Ms Smith said she never owned or handled a gun while in Syria and that she didn’t pass on any military expertise.

“No, I didn’t do anything, I never even owned a rifle when I was in [Islamic State], I didn’t even own a gun. I, my husband many times said to me, you want me to buy you one? I said no. He said it’s just for self-defence or, I said I don’t want, I don’t want.”

“I think anyone that knows me, you know in the army or outside the army or anywhere in my life, will know that, they know me, that I wouldn’t pick up the weapon and fight and stuff like that. I didn’t do it, I didn’t own a rifle, I didn’t teach them anything.”

She said she attended one military training class being taught by a woman “just to see” what she was teaching.

“I didn’t fight in Baghouz, I just took me and my child and got out of there all the time.”

She said she doesn’t believe in suicide attacks and was not “out to kill anyone”.

Ms Smith also told the Irish Mail on Sunday she was easily led and would never travel to such a place again.

“My biggest mistake is not having patience and seeing with my eyes to what was going to happen.

“I just ran, ran with the crowd like I always do. Ask my mum, I run with the crowd all the time. And that’s what I did. I didn’t listen to anyone, I didn’t take any advice, I just ran. And I wish I didn’t. I wish I had just took my time.”