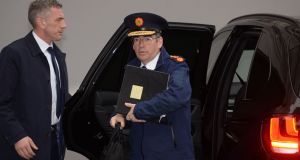 Garda Commissioner Drew Harris: security has been significantly stepped up for Mr Harris due to his previous role in the PSNI and the suspected threat from dissident paramilitary groups. Photograph: Alan Betson

Mr Harris had been attending an appointment in Northern Ireland on March 25th and was being driven back to headquarters where he currently lives.

The commissioner, who previously served as the PSNI’s deputy chief constable, is accompanied by armed officers at all times on both sides of the Border.

In the Republic, gardaí from the Emergency Response Unit (ERU) are responsible for his security while in Northern Ireland he is accompanied by PSNI close protection officers.

On March 25th, Mr Harris was driven to the Border by armed PSNI officers in a specially reinforced, unmarked Range Rover which was met at the Border by a Garda ERU vehicle.

Mr Harris remained in the PSNI vehicle which drove in convoy with the ERU vehicle to Dublin.

When the vehicles arrived at headquarters, a garda at the security kiosk allowed the ERU vehicle to enter. However, she didn’t recognise the unmarked Range Rover which had a Northern registration plate.

Fearing a security threat, she activated the security bollards at the entrance which speared the bottom of the car and damaged the undercarriage. No one was injured in the incident and the vehicle is undergoing repairs.

Gardaí have refused to comment on the matter except to confirm an incident on March 25th. “However, for operational reasons we won’t be commenting further,” a spokesman said.

The PSNI said both it and the Garda were “content normal procedure was followed”.

A PSNI spokesman said when either force carried out duties in either jurisdiction, “it is within the law and with full permission and knowledge of the host service”.

Mr Harris, who is originally from Co Down, is a frequent visitor to Northern Ireland.

PSNI officers are not permitted to carry firearms in the Republic. When Mr Harris became commissioner in September, the Garda and the PSNI agreed to draft a memorandum of understanding on how to handle his security arrangements.

However, it is understood this has yet to be completed.

“My understanding is that, contrary to standard procedure, Commissioner Harris did not change between PSNI and Garda vehicles at the Border and continued to Dublin from the North in the PSNI vehicle,” Sinn Féin justice spokesman Donnchadh Ó Laoghaire said on Sunday.

“This raises a series of questions about why standard procedure was abandoned, whether the gardaí on duty at the Phoenix Park were informed of this and, if not, why not?”

He called on Mr Harris to “immediately make a statement and clarify this matter”.

The heightened security required for Mr Harris has created several headaches for him and the Garda since he took up the post six months ago.

While previous Garda commissioners had always received some level of security, this had to be significantly stepped up for Mr Harris due to his previous role in the PSNI and the suspected threat from dissident paramilitary groups.

His father. Alwyn Harris, who was a superintendent in the RUC, was killed by an IRA car bomb at the height of the Troubles in 1989.

The commissioner lives with his wife in a residence on the Garda Headquarters grounds in the Phoenix Park in Dublin while security work is completed on a private residence elsewhere.

Last year, Mr Harris’s wife was told she could no longer walk their dog in the park due to security concerns. A garda was assigned to walk the animal daily.