Irish gang figure to appear in British court after arrest over guns, drugs

Thomas Kavanagh (51) was one of three arrested at Birmingham Airport 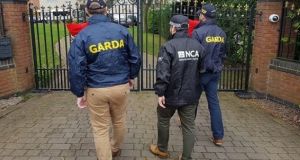 An Irishman linked to the Kinahan crime cartel has been charged with a firearms offence by British police.

Dubliner Thomas Kavanagh (51) is due to appear before the courts in Britain on Monday to answer the charge which relates to a stun gun banned under firearms legislation.

The hearing will be at North Staffordshire Justice Centre in Newcastle-under-Lyme.

He was one of three men detained in Birmingham on Saturday as part of a joint operation between the UK’s National Crime Agency and An Garda Síochána.

Members of the Garda were on the ground in Britain during the operation, which involved a number of searches as well as the arrests of the three men.

While garda members have no police powers outside the Republic, they can travel to other jurisdictions and offer advice to the local police.

Kavanagh’s brother in law was David Byrne, the 34-year-old man shot dead in an attack in the Regency Hotel, Dublin, three years ago.

One of the other men arrested on Saturday with him at Birmingham Airport was a 20-year-old that Kavanagh is a close associate of.

That younger man has since been released by police in Staffordshire on bail after being questioned about alleged money laundering.

The third man detained, a 19-year-old, has also been released. Inquiries into his role, if any, in the alleged gun and drug crime under investigation is continuing.

On Sunday the National Crime Agency released a statement saying Kavanagh, who has been living in Britain of late, had been charged with possession of a firearm.

The statement added he had been detained on Saturday as part of its investigations into “the supply of drugs and firearms” in Ireland and the UK.

“Thomas Kavanagh, of Tamworth, was detained as he arrived at Birmingham Airport, and arrested on suspicion of conspiring to import and supply drugs, firearms and ammunition, as well as money laundering,” the NCA statement said.

“NCA officers, supported by colleagues from An Garda Síochána and Staffordshire Police, conducted a number of searches and recovered a combination torch and stun gun - which is illegal to own and possess in the UK.

“Kavanagh was remanded in custody overnight and will appear at North Staffordshire Magistrates court tomorrow (14 January).

Kavanagh is married to the sister of deceased David Byrne, though she has no involvement in crime.

Church of England rules Irish inscription on grave stone must have translation 20:44
Less than half of fathers entitled to paternity leave took time off work 20:35
Big drop in Garda use of Covid-19 powers despite bank holiday weekend 20:17
A third of arrivals in Ireland are not answering phone for self-isolation checks 19:43
Coronavirus: Speed limits to be cut to 30km/h across Dublin City Council roads 19:32