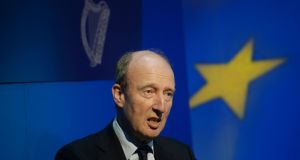 Minister for Transport, Tourism and Sport Shane Ross has used his veto on the appointment of judges. Photograph: Alan Betson

The appointment of two judges by the Government has been blocked after the Independent Alliance sought a “compelling argument” for proceeding with the selections.

Minister for Justice Charlie Flanagan had sought approval for appointments to be made to the High Court and the District Court at the last two Cabinet meetings.

However, the matters were considered by the Cabinet and the appointments did not proceed due to the objection of Minister for Transport Shane Ross and the alliance, which is understood to be eager for the Judicial Appointments Bill to be introduced before any more positions are filled.

This is the first time Mr Ross has used his veto on the appointment of judges.

Former taoiseach Enda Kenny had an informal agreement with Mr Ross that judicial appointments would not take place until the Bill was enacted.

It proposes that a new judicial appointments board with a lay majority and a lay chair be established. The Bill has faced significant opposition from the judiciary and members of the opposition.

However, Mr Ross had agreed with Mr Kenny that appointments should be made when vacancies were identified in the system.

Government sources told The Irish Times that Mr Ross and the alliance are eager for that legislation to proceed before any appointments are made.

“The agreement has always been that appointments would not be made until the new laws have been passed. The Independent Alliance feels it has allowed a number of appointments to be made under the old system,” one said.

“The new system is nearly completed, so their argument is simply that there has to be a compelling argument for the appointments to be made or the Government should wait. This is not Government-collapsing territory.”

The Bill has completed the committee stage in the Oireachtas but has further ground to cover, and no date has been set for its enactment.

It is understood the alliance may agree to the appointments, as long as the Bill is prioritised by the Government and a date set for its consideration.

One source in the alliance said this was “hardball” but it “had to be done”.

The vacancy in the High Court has arisen due to the appointment of Mr Justice Paul Gilligan to the Court of Appeal, while two vacancies have arisen in the District Court.