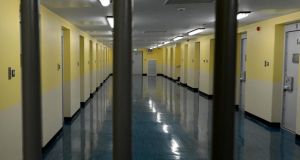 The Mountjoy Prison reception wing. Prison officers have claimed a prisoner who recently stabbed staff in Mountjoy was given €65 and a birthday cake just days after lashing out at the two officers. Photograph: David Sleator/The Irish Times.

Security measures for prison officers dealing with violent inmates are to be heightened to include the wearing of stab-proof vests.

Minister for Justice Frances Fitzgerald has insisted the prison service was not soft on prisoners who attacked officers following the stabbing of number of officers in separate incidents recently.

The Minister’s comments followed accusations by the Prison Officers’ Association (POA) that a prisoner who recently stabbed staff in Mountjoy, before being transferred to Portlaoise, was given €65 and a birthday cake just days after lashing out at the two officers.

POA president Stephen Delaney told the organisation’s annual conference in Co Clare that the prisoner who had received a cake had been at the centre of more than 150 disciplinary actions, mostly for assaults on staff.

“After viciously slashing two officers’ heads he received a cake, minerals and €65 into his account from the management of Portlaoise Prison while he was on punishment,” he said.

“This is extremely frustrating for our members; when such acts of violence are almost rewarded by the prison management.”

When asked about the case, Ms Fitzgerald stressed she was not familiar with the precise details but said: “you should not reward bad behaviour, obviously you reward good behaviour”.

“The broader message is that we will work to prevent assaults and we will give prison officers the support and the resources; with stab-proof vests and anything else we can provide,” she said.

Ms Fitzgerald said the “control and restraint advisory group”’ had made a series recommendations arising from the Derek Brockwell escape in February. These would be implemented and the working environment made safer for staff.

Brockwell, a 53-year-old armed robbery from Glasgow, stabbed two prisoner officers in Tallaght Hospital, Dublin, after he had been escorted from Portlaoise Prison for a medical appointment.

Anti-stab vest will now be worn by all staff on escorts identified as high risk and bullet-proof vests will be purchased for use on armed escorts. Staves and incapacitant pepper spray will be used on high-risk escorts.

After Brockwell escaped and was recaptured, it emerged prison officers had repeatedly requested armed Garda escorts for him, though they had never been granted.

Ms Fitzgerald said the criteria for requesting armed escorts was being tightened, with a view to ensuring they were only requested when “absolutely needed”.

Mr Delaney also expressed concern that violent prisoners who attacked staff were “being sent the wrong message by prison management”.

A fish tank had been provided to a prisoner who was so violent that staff dealing with him had to wear riot gear. Serving a sentence for stabbing three women in Dublin city centre, he had also been provided with a PlayStation and games for it.

The construction of a small garden “to pacify him” was also under consideration by prison management, the POA has claimed.

“The management get the PlayStation games for him and bring them down to him themselves and they also get special brown bread in for him,” said POA assistant general secretary Gabriel Keaveny.

Mr Delaney added that in some parts of the prison system, newspaper were not permitted because they may impact the mental state of disturbed prisoners. Yet prison management were allowing the same prisoners to have razor blades to shave.

And in the case of the prisoner who received the cake in recent days, blades had been used by him to stab and slash the two officers he attacked in Mountjoy’s challenging behaviour unit.

Irish Prison Service director general Michael Donnellan said the prisoner had purchased a cake and bottles of soft drink from the tuckshop, using the gratuity payments to which all inmates were entitled.

He conceded the “optics” of the prisoner having money to buy items to mark his birthday so soon after the attack in Mountjoy were unfortunate and that the situation could have been handled differently.

However, he insisted attacks on staff would never be rewarded or taken lightly.