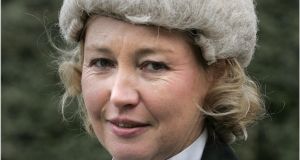 Ms Justice Heneghan: her departure causes a headache for the High Court President, who will now have to deal with the court’s increasing workload with one less judge. Photograph: Dara Mac Dónaill

Senior judge Margaret Heneghan has resigned unexpectedly from the bench after only two years in the High Court.

It is unusual for judges to step down before the mandatory retirement age of 70 which is when they receive their full pension.

She is married to successful businessman Austin Power, who in 2015 sold Comfort Keepers, a nursing home help franchise, for a sum believed to be in the millions of euro, to a French company.

The early departure of Ms Justice Heneghan, who is 58, means she will only qualify for about a quarter of the judicial pension. Rules introduced in 2012 state judges must serve 20 years on the bench to qualify for a full pension, up from 15 years under the old system.

Under section 6 of the Courts Act 1961, a judge who wishes to step down early must formally inform the President. It is understood Ms Justice Heneghan sent her resignation letter to the Department of the Taoiseach which forwarded it to President Michael D Higgins during the summer courts recess.

The letter stated she would be resigning on October 2nd, the first day of the new legal year.

There was surprise at the decision in legal circles this week to Ms Justice Heneghan’s relatively young age and short tenure at the High Court.

She was called to the bar in 1993 after which she specialised in family law and personal injury cases. She also sat on the Legal Aid Board from 2009.

She was made a senior counsel in 2009 and a year later was appointed a judge of the Circuit Court.

In 2015 she was elevated to the High Court, one of a group of five people appointed to replace outgoing members. The elevation caused surprise among other judges due to the fact that Ms Justice Heneghan had mainly sat as a criminal judge on the Circuit Court.

Her departure causes a headache for High Court President Mr Justice Peter Kelly, who was already understaffed and will now have to deal with the court’s increasing workload with one less judge.

If Ms Justice Heneghan chooses to return to practice she will only be allowed argue cases in the Court of Appeal or Supreme Court as former judges cannot practice in their old jurisdiction or lower jurisdictions. However it is understood she does not intend to resume her legal career.

It is not known if her replacement will be appointed immediately or if the Government will wait for the proposed Judicial Appointment Bill to pass and appoint a replacement under the new system.

The Bill proposes that judicial appointments be handled by a committee comprising of judges and lay people, with a lay majority and lay chair.