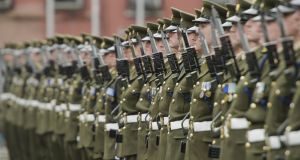 The Government has moved to address a growing crisis in the Defence Forces over falling numbers and increased levels of highly skilled personnel opting out of military life to pursue better paid jobs in the private sector.

Minister of State for Defence Paul Kehoe (Fine Gael), has said more than 800 recruits would be in training by the end of the year. He added that Government was committed to continuing that level of recruitment for several years. About 500 members leave or retire each year.

Mr Kehoe added personnel on fixed-term contracts set to expire from 2019 would be reviewed with a view to allowing them to remain. Some 300 noncommissioned officers would also be promoted.

The Government had already committed earlier this year to pay restoration for the Defence Forces, with three-star privates set to earn €27,000 – up from €21,000.

Chief of Staff Vice Admiral Mark Mellett said he believed the package would help stem the trend of falling numbers in the Army, Naval Service and Air Corps.

However, Mr Kehoe could not promise that by the end of next year the Defence Forces would be at the establishment strength set down by Government: 9,500 personnel and a further 500 in training.

The package of measures aimed at stopping the exodus from the Defence Forces was announced on Tuesday at the annual delegate conference in Ballyconnell, Co Cavan, of the Permanent Defence Forces Representative Association.

It represents Defence Forces soldiers, airmen and sailors and is the largest military staff representative body in the State.

It has said personnel were paying to leave the Defence Forces in large numbers, with the total strength now just below 9,000.

Some 2,840 personnel have left the Defence Forces in the past five years, the association said. And about 1,000 of those had paid to leave early at an average of €300 each.

The staff association added that, with numbers falling and very skilled personnel among those leaving, a group of personnel hired on fixed-term contracts after 1994 were about to reach the expiry of their contacts. The association believed if action was not taken to extend those contracts and retain the personnel, the Defence Forces staffing crisis could worsen very quickly.

Mr Kehoe said those contracts would now be examined, as the association had requested. But he insisted people were not paying to leave the Defence Forces because they were desperate to leave.

Instead, they were being asked for a contribution – €300-€6,000 – as they had broken their contracts of employment. And they were leaving to take up opportunities in the private sector, now more numerous because the economy was “booming” compared with the recession years.

“Compared to other defence organisations across the world; we are in no different a situation,” Mr Kehoe said. “If you look at the number of people who have left the Defence [Forces]; it’s very much the average over each of the last 10 years.”

He also denied a claim by the association that the Naval Service had eight ships and only enough staff to man six of the vessels.

“I have spoken to senior personnel in the Naval Service on several occasions and they have never stated that they are unable to run eight ships. But like everyone ... we have our own pinch points and challenges. But we want to address them.”

He conceded the loss of very specialist skills, such as air-traffic controllers and army bomb disposal experts, was a concern. But enhanced rates of pay and the possible re-entry of some highly skilled personnel who had left was being examined.