Lay majority on appointments board is a concern, says Frank Clarke 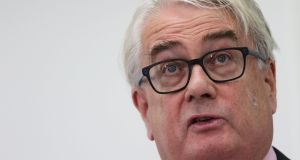 The new Chief Justice is concerned special interest groups, such as those on either side of the abortion debate, will attempt to influence the appointment of judges under the proposed judicial appointments system.

Mr Justice Frank Clarke, who was appointed last July, said he shares the concerns of his colleagues about the Judicial Appointments Bill which is currently before the Oireachtas.

Under the proposed legislation judges would be appointed by a board which would include judges but have a majority of lay members. Its chairperson will also be a layperson.

“There is a slight concern, which has been expressed by the Association of Judges, as to who will the lay people be? Will people try and get on that body who have agendas?” Mr Justice Clarke said.

A lay majority appointments committee could seek to appoint judges “who have one particular perspective or not,” he said.

“Take the current controversy on the eighth amendment. People who might be pro-choice or pro-life might seek to influence the composition of a judicial appointments board precisely to influence the kind of judges who are appointed in the hope it might influence decisions.

“I think you would be naive to think that wouldn’t be something that could happen if great care is not exercised on how the body is structured.”

He also said there are concerns that lay people would lack sufficient knowledge to appoint the best candidates for a position.

The Chief Justice said that he and his colleagues will make their views known if they are asked as the bill makes its way through the Oireachtas.

He said he would be happy if there was “an equal number of lay and legal people on the panel”.

Mr Justice Clarke was speaking to Marian Finucane on RTÉ Radio, the first time a sitting chief justice has granted a broadcast interview. On the subject of judges’ interactions with the public he said “we can’t complain if they don’t explain.”

“I think maybe we haven’t been good enough in the past about going out and explaining things.”

Mr Justice Clarke was a member of Fine Gael but was appointed to the bench by a Fianna Fáil government. He said he doesn’t believe party political influences are a problem in the higher court.

“I’m not saying politics don’t play a role,” he added. “I think you would be naive to say it doesn’t.”

The Chief Justice accepted that his own political outlook is “socially progressive” and that he campaigned against the introduction of the eighth amendment to the Constitution which effectively banned abortion in nearly all circumstances. But his outlook doesn’t affect his decisions, he said, including on the eighth amendment.

“As long it remains there...I would feel a constitutional obligation to uphold it.”

Asked about how he felt when Fianna Fáil leader Micheál Martin said in the Dáil earlier this year that the former Attorney General Maire Whelan “was no Frank Clarke and no Adrian Hardiman”, the Chief Justice said he was “morto”.