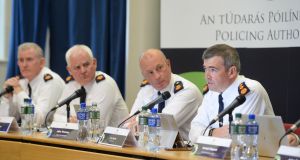 It is very important the force is prepared to deal with the fallout, especially considering the clashes that occurred at a Take Back the City protest in Dublin’s north inner city three weeks ago, he added.

Men who called to a property on behalf of the owner to instruct protesters to leave were masked. And when Public Order Unit gardaí were called in as a large crowd gathered and tensions mounted, those officers were also wearing balaclavas.

“In some ways the officers on the ground were placed in an invidious situation,” Mr Harris told a meeting of the Policing Authority on Thursday.

The gardaí present were “only there” to keep the peace as a civil court order that ordered protesters out of a building was enforced by a landlord’s agent.

“We are likely to have further of these (protests). And I think we need a public facing account about what our responsibilities and roles are in these situations,” he added.

The timing of the North Frederick Street event, in the evening at the end of rush hour, presented a difficulty for the Garda.

“People are mobile and available to support (a protest) and it wouldn’t be a time of our choosing. But certainly there were issues about our appearance and the style and the manner in which we went about it which were of concern to me.

“This is a very emotive issue and we don’t know when the next one is going to arrive,” he said of repossessions. He added that the Garda wanted to be seen as “impartial”.

Mr Harris was appearing before the authority for the first time. He also agreed that the policing of an anti-water charges protest in Jobstown in Tallaght four years ago would be examined in the context of how gardaí gave evidence in related subsequent court cases.

However, this would be a “lessons learned” review. A more in-depth review of the court cases, in which protesters were acquitted, could not be carried out.

Authority chairwoman Josephine Feehily said she had asked the Garda Inspectorate to review the policing around “spontaneous public order incidents”.

On the unrelated issue of the misclasssification of homicides by the Garda, authority member Judith Gillespie noted the authority had previously been constantly assured by senior Garda management there were no substantive issues with misclassified homicide cases, other than crime categorisation errors.

However, this was not proving to be the case as an internal Garda review into the misclassifications is continuing.

In some domestic violence cases, said Ms Gillespie, records of previous incidents involving the same people were not recorded. And so potentially life-saving information was unavailable to gardaí called to subsequent disturbances involving those people.

On other matters, Mr Harris said he had officially changed the name of “civilian workers” in the force to “Garda staff” to help integrate them.

The authority was also told the practice of gardaí driving Garda cars only on the permission of chief superintendents had almost ended. “Chief’s permission”, as it is known, to drive Garda cars is needed when gardaí have not undergone driver training.

Mr Harris also said Kinahan gang figure Freddie Thompson had been convicted of murder and jailed for life after a world-class murder investigation.