More than €2.3 million in cash and drugs recovered during four separate raids 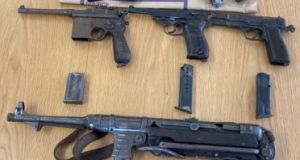 Some of the guns seized by gardaí at a site off the Naas Road in Rathcoole, Co Dublin.

Three men have been arrested and guns, drugs, gold and cash worth more than €2.3 million have been seized by gardaí targeting organised crime gangs.

The arrests and seizures came about during four separate operations by Garda organised crime units, in Dublin, Meath and Louth over the last two days.

The cache were found near a petrol station and comprised five handguns and one machine gun.

“A preliminary technical examination of the firearms has been carried out and further tests are awaited,” the Garda said. “No arrests have been made and investigations are ongoing”

On Thursday, as part of an intelligence lead operation by the Garda National Drugs and Organised Crime Bureau (DOCB) and supported by a Special Crime Task Force, detectives detained a 43-year-old Dutch national in the Dublin 4 area and seized about €200,000 in cash.

The operation was “targeting persons suspected to be involved in serious and organised crime who operate at an international level,” a Garda spokesman said.

The man was arrested on suspicion of money laundering offences and brought to Irishtown Garda Station for questioning.

DOCB officers then conducted followed up searches at a Dublin 4 premises and found a number of gold bars and a further significant quantity of cash, some of which was vacuum packed. The man, who has an address in Andorra, appeared before Dublin District Court on Friday night where he was remanded in custody.

In a separate operation, DOCB officers, again acting on intelligence, targeted a separate organised crime group which is involved in serious offending in the Dublin and Meath areas.

Armed gardaí intercepted a car in the Kilinarden area of Tallaght in Dublin 24 and detained a 24-year-old man.

A search of the vehicle uncovered heroin and cocaine. Follow up searches were carried out at houses in Ashbourne and Rathoath in Co Meath where gardaí found heroin and cocaine worth about €1.6 million along with drug packaging equipment.

The suspect remains in custody in Tallaght Garda station under suspicion of drug trafficking.

In a third operation, Gardaí from the National Bureau of Criminal Investigation (GNBCI) “targeting persons suspected to be involved in serious and organised crime who operate at an international level” arrested an Irish national in Dundalk, Co Louth on suspicion of passport fraud.

The 40-year-old suspect is currently being questioned at Dundalk Garda station.

Assistant Commissioner in charge of Special Crime Operations, John O’Driscoll, said the three operations represent significant successes in tackling organised crime “and another step in pursuing our ambition to dismantle those organised crime groups that are causing harm within our communities.”

Mr O’Driscoll, who has overall responsibility for the Garda’s organised crime units, said in the first month of 2020, DOCB officers have seized 10 firearms, 2,000 rounds of ammunition, over €600,000 in cash and drugs with an estimated value of about €1.6 million.