Any racial or ethnic bias within Garda needs to be examined, civil liberties group says 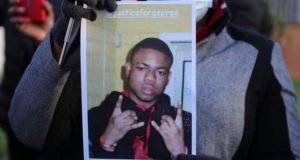 A protester holds up a photo of George Nkencho (27) at a rally outside Blanchardstown Garda station. File photograph: Nick Bradshaw

The Garda Síochána Ombudsman Commission (Gsoc) has told the Irish Council for Civil Liberties (ICCL) it was “well aware” of its legal and human rights obligations as it investigates the death of George Nkencho, who was fatally shot by gardaí last month.

The ICCL wrote to Gsoc on Friday informing the Garda watchdog that it needed to move to “restore” public confidence in its investigation. The civil liberties group added Ireland “cannot ignore the international resonances of a police shooting of a black man”.

However, Gsoc pushed back, telling the ICCL it knew how to carry out its investigations, and telling it the rights of all of those involved, including the gardaí, must be taken into account.

The ICCL issued a public statement on Sunday, outlining what it had said to Gsoc in its correspondence last week about how the investigation into the fatal shooting of Mr Nkencho must be conducted.

In reply to queries from The Irish Times, Gsoc confirmed it had received correspondence from the civil liberties group on Friday and had responded on the same day.

“We assured the ICCL that Gsoc is well aware of the State’s obligations under Article 2 of the European Convention on Human Rights,” Gsoc said in reply to queries.

“We also noted that we are obliged to carry out a fair investigation in relation to all parties having regard to both the rights of the family of the late Mr Nkencho and the gardaí involved. In the challenging act of balancing these rights Gsoc’s legal unit has been available to the investigation team throughout.”

Mr Nkencho (27) was shot dead in the front garden of his family’s home in Clonee, Dublin 15, on December 30th after a dispute during which he was armed with a knife. He was shot a number of times by the Garda Armed Support Unit after he appeared to lunge at gardaí with the weapon in the aftermath of an alleged assault by him at a nearby shop.

The shooting followed a lengthy interaction between Mr Nkencho and gardaí, during which Tasers and pepper spray were used in a bid to subdue him, the Garda said. The dead man’s family has said he was suffering from mental health issues.

The ICCL told Gsoc in its correspondence last Friday that the “pain and anger in the African-Irish community in Ireland has been palpable since the killing”. Furthermore, Ireland was “not immune to allegations of racial discrimination in policing”, it said.

The group added that it was “particularly worrying” the Nkencho family had “yet to be interviewed” by Gsoc, the independent body investigating the shooting. Some family members were in the family home when Mr Nkencho was shot.

The council said possible racial or ethnic bias within the Garda needed to be examined in the context of both the shooting of Mr Nkencho and across the force generally.

Doireann Ansbro, the ICCL’s head of legal and policy, called on Gsoc to “interview the Nkencho family as soon as possible in order to restore confidence that the investigation will be thorough”.

She continued: “We’ve also called on them to take into account all of the gardaí’s human rights obligations including the prohibition on discrimination. We think there is a need to ensure they investigate potential bias - both explicit and implicit.

“In order to really examine this, it may be necessary for Gsoc to recommend a wider systemic inquiry following the current one. This could include, for example, whether gardaí receive adequate training on bias, as well as an investigation into the policing of minority communities,” she said.

The ICCL said when the State used lethal force against a person and an investigation started there was an obligation to include the family “at all stages of the process”. If Gsoc did not fulfil its human rights obligations “another form of inquiry will likely be necessary”, the council said.