Over €1m seized from Dublin premises in organised crime operation 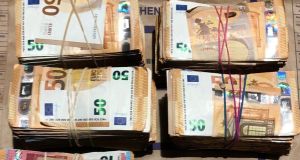 Bundles of cash seized at a Dublin premises by gardaí on Sunday. The “significant” cash seizure will contribute to the “disruption and potential ultimate dismantling” of particular organised crime groups, Assistant Commissioner John O’Driscoll said. Photograph: An Garda Síochána

Gardaí in Dublin seized over €1 million in cash from two premises in Dublin on Sunday as part of an operation targeting an organised crime group.

A number of vehicles were also seized during the searches of premises in North Dublin and Dublin’s city centre. The Garda National Drugs and Organised Crime Bureau, assisted by the Garda Dog Unit, discovered the concealed cash while searching a vehicle at one of the premises. While the discovery is being further examined, it is believed the amount seized is in excess of €1 million.

Assistant Commissioner and head of the Organised and Serious Crime unit, John O’Driscoll, said the force continues to “target those causing most harm in our community”.

This “significant” cash seizure will contribute to the “disruption and potential ultimate dismantling” of particular organised crime groups, he said, adding that investigations are continuing.

Separately, a 35-year-old man was arrested on Saturday following the search of an address in Coolock, Dublin, where gardaí seized €117,000 cash, a vehicle and a Rolex watch.

The man was arrested on suspicion of involvement in a money laundering-related offence. He is being detained under Section 4 of the Criminal Justice Act.