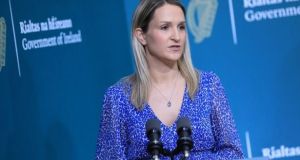 Minister for Justice Helen McEntee is due to announce the new measures on Friday. Photograph: Julien Behal Photography

Gangland figures and others using children to commit crimes will face up to five years in prison under new legislation being introduced by the Government.

The move comes after a wide range of research has emerged over the last decade about the involvement of children in very serious crime, often being used by senior gang members insulating themselves against conviction.

In many cases senior gangland figures in the Republic have recruited children in their family network into gang activities and when they became established they were often used to recruit other children from the same areas.

While legislation already in place allows for criminals using children who commit crime to face conviction themselves for those offences, the new measures due to be announced on Friday by Minister for Justice Helen McEntee go further.

The Criminal Justice (Exploitation of Children in the Commission of Offences) Bill makes it a criminal offence for an adult to “compel or coerce, or induce or invite, a child to engage in criminal activity”.

Anyone found guilty of the new offences could be jailed for up to 12 months on summary conviction and for up to five years on indictment, though the child would not face prosecution.

The adult could also be convicted, in a separate criminal process with added sanctions, of the crimes carried out by the child on their behalf.

Ms McEntee said the new offences were aimed at “stopping the gang bosses committing the most awful crimes” and “leading our young into a life of crime”. She wanted to “root crime out of our communities” and “ensure that crime does not pass down through generations”.

She added the new measures were being introduced in the wake of the Greentown findings, a four-year project by researchers in University of Limerick published in 2017. It concluded criminal gangs were recruiting and exploiting children as young as 11 years by using drugs, alcohol and the notion of status.

The project was now continuing and being extended in a bid to intervene in the lives of at risk young people. Further strategies were being developed for the area in and around Darndale, north Dublin, and Drogheda, Co Louth, after separate reports on both areas by former Garda assistant commissioner Jack Nolan and former head of probation and welfare Vivian Guerin.

Garda sources told The Irish Times while they had long been concerned about children, including those in national school, being used by gangs to perform tasks such as hiding and transporting drugs and guns, the nature of that exploitation was worsening.

“In the last few years we’ve seen examples of young people who are maybe 15 and 16 years old being used as debt collectors and enforcers,” said one source of the ongoing feud based around Drogheda.

“We’ve had groups of young lads descending on a house to smash all the windows, smash up cars and even petrol bomb the houses to intimidate people into paying drugs debts.

“They are seen doing it and then they become a target to be beaten themselves, or even stabbed or shot. And they are getting that deep into the scene before they’re even 18 years old.”

Another Garda officer familiar with the ongoing feud in north Dublin, based mainly around Coolock, pointed out most of the victims shot dead in the past two years were aged 21 to 23 years. He said some of those involved were “veterans of gangland” in their teenage years, with access to large quantities of drugs and guns and an established network of gangland allies and enemies.