Timmy Hourihane (53) found with head injuries on the Mardyke, Cork in October 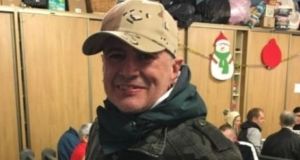 A former chef who worked with the Hilton Group in the UK, Timmy Hourihane returned to Ireland following the break –up of his marriage

Gardaí are to prepare a file for the DPP after releasing without charge two men arrested for questioning about the killing of a 53-year-old homeless man in Cork city two months ago.

Detectives investigating the killing of Timmy Hourihane on the Mardyke on October 13th arrested a 26-year-old man in Cork city centre on Monday morning and brought him to the Bridewell Garda Station for questioning.

On Monday afternoon, detectives from Cork travelled to the Midlands where they arrested a 37-year-old Kerry man and brought him to Portlaoise Garda Station for questioning.

A Garda spokesman confirmed gardaí would now prepare a file in relation to each man which will be forwarded to the Director of Public Prosecutions as part of their investigation into the killing of Mr Hourihane.

Father of one Mr Hourihane died at Cork University Hospital in the early hours of October 13th. He was taken there by ambulance after being found with serious head and body injuries on a green area in the Mardyke.

Mr Hourihane had been found by a wall at the green area opposite the main gates to UCC by firefighters when they were called to deal with a blaze at his tent which was among a number pitched in the area by homeless people.

Gardai were also called to the scene of the assault and saw Mr Hourihane before he was transferred to CUH. But officers familiar with the homeless were unable to identify him such were the extent of his injuries to his face and head.

Assistant State Pathologist, Dr Margaret Bolster found no evidence of Mr Hourihane being attacked with a weapon or implement but his injuries were so severe gardaí began investigating if he was attacked by more than one person.

Gardaí believe that Mr Hourihane was the victim of such a violent and sustained assault that he bled heavily and his blood may have ended up on the clothes and footwear of whoever attacked and killed him.

It is understood that gardai seized items of clothing and footwear from a number suspects in the case some weeks back and sent the items for analysis to the State Laboratory at Forensic Science Ireland.

The late Mr Hourihane was a familiar figure among the homeless on the streets of Cork, availing of services from a number of charities including Cork Simon, the St Vincent De Paul and Cork Penny Dinners.

A former chef who worked with the Hilton Group in the UK, Mr Hourihane returned to Ireland following the break –up of his marriage but he lapsed into alcoholism following the death of his partner, Michael from cancer in Cork.

Cork City Council issued a statement just days after Mr Hourihane’s death in which it confirmed that Mr Hourihane had presented to homeless services in the city on a number of occasions over several years.

According to Cork City Council, Mr Hourihane had been granted a permanent social housing tenancy with the necessary housing supports by agencies helping people to move on from homelessness.

However, it is understood that Mr Hourihane failed to take up the offer of social housing tenancy made by Cork Simon but Cork Simon’s Outreach team had remained in contact with him over the past number of years.

A native of the Sheep’s Head Peninsula in West Cork, Mr Hourihane is survived by his mother (83), Cathy, his brother, Denis, his sisters, Annemarie, Catherine, Nuala and Margaret and his son, Elliott (23), who lives in the UK.