Protest outside Blanchardstown Garda station after death of George Nkencho (27) 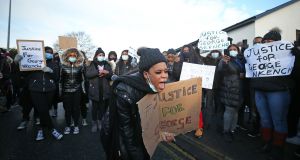 Protestors at Blanchardstown Garda Station on Thursday morning after the shooting dead by gardaí of George Nkencho (27). Photograph Nick Bradshaw

Garda Ombudsman investigators are to examine a video capturing the fatal Garda shooting of a man in his front garden in west Dublin on Wednesday.

George Nkencho (27) was shot at least three times by members of the Blanchardstown Armed Support Unit (ASU) while allegedly brandishing a knife and threatening gardaí.

A 13-second mobile phone video shot by a passerby and confirmed by The Irish Times shows a man in a blue jumper surrounded by ASU members outside Mr Nkencho’s family house on Manorfields Drive in Clonee.

A gunshot can be heard before the man in blue is seen swinging his arm towards the officers. It is not clear from the footage if there is something in his hand.

Another four shots are then heard. The man appears to stumble before falling to the ground on the fifth shot.

The footage was taken from the other side of a green area in front of the house.

Sources say the shots all came from an official Garda weapon. At least three hit Mr Nkencho. ASU members administered first aid before Dublin Fire Brigade paramedics arrived and began CPR. He was taken by ambulance to James Connolly Memorial Hospital where he was pronounced dead a short time later.

The Garda said in a statement it implemented “a graduated policing response” after being threatened with a knife. It is understood this involved the use of pepper spray followed by the firing of two Taser guns.

The incident began just after midday when, according to eyewitnesses, Mr Nkencho entered the Eurospar supermarket in Hartstown were he punched a manager in the face, injuring the victim’s nose. Mr Nkencho then produced a large knife from his pocket and brandished it towards staff.

He then walked into the post office section of the supermarket as unarmed gardaí began to arrive. The supermarket manager was taken to hospital for treatment.

At least 12 unarmed gardaí followed Mr Nkencho out of the shop and through several housing estates while instructing him to drop the knife.

By the time Mr Nkencho arrived in his front garden at 12.30pm, the ASU had arrived from Blanchardstown Garda station and took over the operation. This is when the fatal shots were fired.

The deceased and his family are originally from Nigeria but had been living in the area for many years. Some family members were in the house at the time. They have since been relocated to a friend’s house.

Gardaí have obtained the video of the shooting which will be passed on to investigators from the Garda Ombudsman Commission (Gsoc).