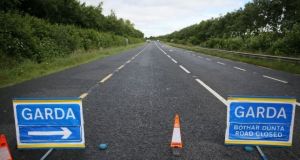 Gardaí­ are appealing to anyone who may have information regarding either crash to contact them. File photograph: Brian Lawless/PA Wire

A man in his 40s died after his car apparently hit a ditch in Co Wicklow.

The incident occurred on the L2166 near Glenealy Village, Co Wicklow at about 7.50pm on Sunday evening.

The man was the only occupant of the vehicle and gardaí and emergency services attended the scene.

On Sunday, the L2166 was closed for an investigation by Garda Forensic Collision Investigators and local diversions are in place.

Gardaí are appealing to anyone who may have information regarding the collision, particularly road users with camera footage who were travelling on the L2166 this evening, to contact Ashford Garda station on 0404 49220, the Garda Confidential Line on 1800 666 111 or any Garda station.

Meanwhile, a 32-year-old motorcyclist died following a collision between a motorcycle and a car in Co Kilkenny on Sunday night.

At approximately 8.45pm, a collision involving a motorcycle and a car occurred on the N10 at Templemartin, Co Kilkenny.

The motorcyclist was pronounced dead at the scene, while the occupants of the car were taken to St Luke’s Hospital, Co Kilkenny, with non-life threatening injuries.

The local coroner was notified and the deceased has since been removed to the mortuary at University Hospital Waterford where a postmortem examination will be carried out.

A full examination of the crash site and vehicles involved will be carried out by Garda Forensic Collison Investigators on Monday morning.

As a result of the collision, a number of road closures are in place.

Both north bound and south bound exits on M9 at J8 Kilkenny at Templemartin are currently closed and Kilkenny bound traffic should exit at J7 Paulstown or J9 Danesfort.

The N10 is also closed at the roundabout on Hebron Road on the Ring Road in Kilkenny City.

Gardaí are appealing to anyone who may have information regarding the collision, particularly any road users with camera footage who were travelling on the N10 at the time, to contact Kilkenny Garda station 056-7775000, the Garda Confidential Line on 1800 666 111 or any Garda station.