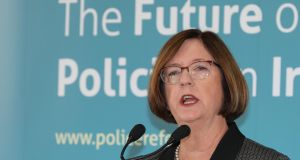 Kathleen O’Toole, chairperson of the Commission on the Future of Policing in Ireland, at the launch of its report. Photograph: Maxwell’s

Gardaí should no longer have power to decide if people are prosecuted for minor offences, and members of the public should be able to report any concerns about policing in their communities to the Garda by mobile app, the Commission on the Future of Policing in Ireland has recommended.

A redundancy package should also be offered to Garda personnel, the commission said. A similar arrangement was put in place when the RUC was transforming to become the Police Service of Northern Ireland and it hastened generational change in that police force.

In order to free up more gardaí for on-street policing, the commission also says the practice of gardaí prosecuting cases in court should stop, adding they should also not be required to attend inquests.

Also aimed at freeing up gardaí for front-line duties, the commission says all “immigration duties” performed by the Garda should be reassigned to the Irish Naturalisation and Immigration Service within the Department of Justice.

However, it says not only were more gardaí required for front-line duties and policing at district or local level, better information on how gardaí were deployed was also needed.

A computer-aided dispatch system that recorded all call-outs gardaí were required for record the movements of gardaí nationwide. Over time this would identified the locations and times that more gardaí were needed.

And when this information was married with more comprehensive and more accurate crime data, Garda management would be in a position to use the resources available to them much more effectively.

The commission also states that policing and security were not the responsibilities of the Garda only, but a range of agencies.

Crisis intervention teams, comprising social services and healthcare workers, should be established to respond out of hours so that gardaí were not alone in dealing with emergencies.

The commission has recommended recruitment into the Garda Reserve be halted pending a review of the unpaid, part-time, force. This is at odds with the Government’s plan to treble the size of the reserve to 2,000 in coming years.

Plans to roll out a district model of policing and relations developed at Garda district level with community groups and representatives have also been put forward.

This is at odds with the divisional model proposed by the Garda Inspectorate, which is currently being trialled and on the basis of which the locations for some new Garda stations have been chosen.

Also suggested is new legislation to clearly define the Garda’s power of arrest, detention and searching. Tablets and mobile phones have also been proposed for all Garda members.

The Commission on the Future of Policing in Ireland was established in May 2017 to review all aspects of policing in the Republic and make recommendations to reform and modernise the Garda.

It was established after the Government and Garda, especially the then Garda commissioner Nóirín O’Sullivan, had come under sustained pressure over the alleged mistreatment of whistleblower Sgt Maurice McCabe and the fallout from several other unrelated policing crises.

The commission has spent the past 17 months reviewing policing in Ireland and best practice abroad as well as speaking to Garda members, the public and stakeholders in the justice field and related areas.

Its report recommends that Garda recruits who already have degrees should spend considerably less time in the Garda College in Templemore.

A new Policing and Community Safety Act should be enacted, the commission says, “redefining policing and the role of the police service and other state agencies in harm prevention”.

The commission also calls for the creation of a “national cyber security centre” that would report to the national security co-ordinator.

It has also recommended the creation of a new post called the “independent examiner of terrorist and serious crime legislation”. It would review the legislation governing national security. It would also adjudicate in those cases where Garda oversight bodies have been denied evidence or information from the Garda on national security grounds.

Another proposed change would see responsibilities allocated to six Garda assistant commissioners based in the regions moved to three senior officers based in Garda Headquarters in Dublin.