Guidelines needed for ‘the who, when and what of using social media in courtrooms’

Procedures are needed so contempt of court laws can be used against those who disrupt court proceedings with social media, the Chief Justice Susan Denham has said. Video: Colm Keena 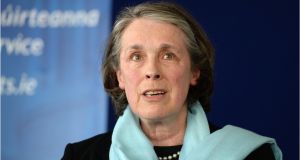 Procedures are needed so contempt of court laws can be used against those who disrupt court proceedings with social media, the Chief Justice Susan Denham has said.

Her comments come in the wake of an unprecedented social media campaign during the Jobstown trial, but also reflect a more general concern amongst the judiciary about social media, in particular as to how it can affect jurors.

“To date, it has been rare that courts in Ireland have had to use contempt of court law to curb inaccurate and disruptive online communications about cases,” Mrs Justice Denham said at the launch of the 2016 Annual Report of the Courts Service.

“It would be naive of us not to plan for the future in this regard,” she said. “The fundamental right to a fair trial does not change in the face of any new means of communication. Rules can and must reflect the new reality.”

She said she will this week send a draft discussion paper on guidelines on the use of social media in the courts to the presidents of all the courts, and ask the Courts Service to engage with the media and the legal professions on the matter.

There has been some discussion already about the possibility of banning certain devices from courtrooms unless they are being used by legal professionals or journalists, as well as how to prevent jurors being influenced by social media or online material.

One of the matters to be considered is who in the system would be responsible for trying to enforce any new rules.

Minister for Justice and Equality, Charlie Flanagan said he was “most anxious that the area of civil and criminal contempt”should be reviewed.

The issue of social media use and court proceedings had arisen on a number of occasions in recent times and he was keen to see the topic reviewed.

“Everyone is entitled to a free and fair trail, without outside interference,” he said. He looked forward to ensuring that any recommendations that emerged from a review would be implemented.

Mrs Justice Denham, who is the chair of the Courts Service board, is to retire as Chief Justice soon and will have her last court appearance on Friday.

She said that in 2016 the Courts Service supported 24,588 court sittings involving 170 judges.

The courts deal with approximately 750,000 civil and criminal cases and other matters each year, with 516,000 of these being in the District Court where 60 per cent of cases relate to road traffic offences.

The 2016 report showed a 15 per cent increase in personal injury cases, despite the existence of a parallel non-court process for such claims, she said.

“Strikingly there was a decrease of 32 per cent in new possession cases year on year,” she said. “Hopefully this is a sign that the effects of our great recession are fading, and that the alternative mechanisms for dealing with personal debt are successful for many.”

There has been a 125 per cent increase over two years of applications under the debt resolution mechanisms of the Personal Insolvency Act. That such legal avenues to exit debt exist is to be welcomed, she said.

The number of trials heard in the Central Criminal Court have increased by 48 per cent over two years, ensuring that waiting times for murder and rape trials do not grow longer.

The final phase of the Fines (Payments and Recovery) Act 2014, which aims to reduce the number of people going to prison for the non-payment of fines, has commenced and enforcement notices were last week sent to more than 2,000 people who have failed to pay fines imposed by the courts. These people must now appear in court in September, but the Chief Justice pointed out that it is still possible to pay in full the fines at issue, right up to the court appearance date.

On social media, she said in order to protect the right to a fair trial, it will be necessary to introduce draft guidelines on “the who, when and what of using social media in courtrooms”.

Also, there has to be a discussion among those who work in and around courts about how such guidelines might work. And, thirdly, there was a need to look at legal reform to take cognisance of the new reality of instant communication.