Clair Tobin: ‘It’s not unique to this file...people fail to put things on files unfortunately’ 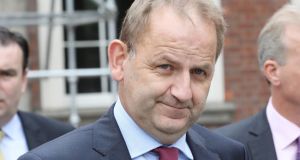 A social worker with Tusla who was asked to review a file on garda whistleblower Sgt Maurice McCabe had said she was given “a sanitised version”, the Charleton tribunal has heard.

The tribunal is looking into the creation and distribution of files by Tusla and the HSE containing false allegations against Sgt McCabe and whether he was the target of a smear campaign.

The Tusla file was opened when a young woman identified as Ms D sought counselling in 2013 about a previously reported allegation investigated by gardaí in 2006.

The DPP decided in 2007 against pressing charges in the case due to lack of evidence.

Clair Tobin, a social worker with SART, the Sexual Abuse Regional Team in Tusla, was sent the files relating to Sgt McCabe after his solicitors wrote to the agency complaining that he was sent a letter in December 2015 stating he was suspected of child abuse.

However, several documents within the file which contained a more serious allegation incorrectly added to the McCabe file from an unrelated case were not included when the file was sent to Ms Tobin.

Ms Tobin said that missing from the file was a record of a meeting where the DPP directed no prosecution of Sgt McCabe in 2007 because “no criminal offence had been described or disclosed”.

Tribunal chairman Mr Justice Peter Charleton asked the witness: “Given you know what you now know do you regard yourself as having been sent a sanitised version of the files as opposed to one with all of the reports, all of the events, all of the contents showing clearly?”

“I don’t know if it was their intention, I just can’t explain it. Stuff wasn’t put in the file where it should be.

“It’s not unique to this file, unfortunately. This is not just files in the Cavan region. People fail to put things on files unfortunately. The things that weren’t put on this file were quite significant,” she said.

Ms Tobin told the chairman she did not know if the files were incomplete due to professional negligence or intentionally.

“I don’t know the people in Cavan well enough in terms of their professionalism, in terms of how their practice is updated on a daily basis,” she said.

She said if a file was being sent elsewhere from her office “you make sure everything is on that file that needs to be on that file. And anything you come across in the meantime you forward to the team that has the file.”

Mr Justice Charleton asked Ms Tobin whether she thought the file was incomplete because of “a cover-up” or because of “an instinctive reaction to circle the wagons and pretend that things weren’t as bad as they were, in other words to pretend to yourself as opposed to other people.”

“I really don’t know,” said Ms Tobin. “I think it is really poor management of the file. I think it should have been allocated to someone straight away when it came through the door.

“We would consider any allegation against a member of An Garda Síochána, a teacher, someone in our own organisation, we need for that to be dealt with extremely sensitively, and I know our practice within SART if something came in they are immediately allocated and they’re responded to.”