Garda has lessons to learn from Patten reform of North policing 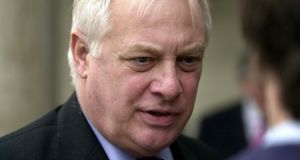 Chris Patten: his report said the RUC should not be disbanded but should be renamed. It proposed a new badge, and that the British union flag should no longer be flown over police buildings

If the Patten Commission was able to reform policing in a bitterly divided society in Northern Ireland – as it did – then there is no reason why similar reform should not be achievable with An Garda Síochána.

It seems clear from the North that the required overhaul of the Garda will be an immense undertaking but it will hardly be as gargantuan as the task of creating a police force acceptable to both communities in Northern Ireland.

Before the former British government minister Chris Patten published his report in September 1999, he and his commission colleagues held town hall meetings on police reform .

In many cases these were volatile, highly-charged and unpredictable events. Just two quick memories. One was a November 1998 meeting in the mainly unionist town of Ballymena where unionist speakers were adamant there must be no change to the Royal Ulster Constabulary (RUC) while nationalists who urged transformation were loudly heckled.

One prominent speaker, a William Wright, noted that two of the three commission members attending the meeting, Mr Patten and former Northern Ireland ombudsman Dr Maurice Hayes, were Catholics. He demanded assurances they would not be influenced by their religious views. “I honestly believe that good honest people fear this commission more than they fear the IRA through 30 years of violence,” said Mr Wright.

Earlier that month the commission learned of the depth of nationalist West Belfast hostility to the RUC when they held a meeting in a school on the Whiterock Road. Speaker after speaker over two hours detailed a litany of complaints against the “sectarian, anti-Catholic” RUC.

Local priest Fr Des Wilson, to general approval, declared, “as long as even one member of the RUC is a member of a new police force, that force will not be acceptable”.

Nationalists wanted disbandment while unionists demanded the status quo, or something very close to it.

The commission persevered, and produced a report containing 175 recommendations . It was by far the most radical reform of policing in the history of Northern Ireland.

The Patten report said the RUC should not be disbanded but should be renamed. It proposed a new badge and that the British union flag should no longer be flown over police buildings.

Other key recommendations included a 50:50 recruitment policy for Catholics and Protestants – at that time Catholic representation was just 8 per cent.

Other significant proposals included the creation of the Policing Board, a Police Ombudsman, and a new code of ethics. It also proposed a progressive reduction in the size of the force .

There were many more political battles to be fought before the new Police Service of Northern Ireland (PSNI) was formed on November 4th, 2001, under RUC chief constable Sir Ronnie Flanagan. At the same time the Policing Board was established.

Currently 88 per cent of the Northern Ireland public have “some, a lot or total confidence” in the PSNI.

When the Patten commission was formed after the 1998 Belfast Agreement such reform seemed just short of impossible. This is something that must be borne in mind as attempts begin to properly transform An Garda Síochána.