Homicide and sexual assaults on the rise, says CSO 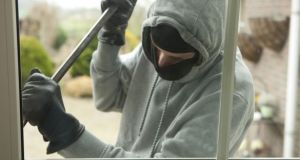 While burglary rates in some parts of Dublin have doubled, the total number of burglaries across the State dropped by nearly a third between 2015 and 2016. Photograph: Frank Miller

The 31 per cent rise (from 29 to 38) coincides with the deepening of the feud between the Hutch and Kinahan gangs, which claimed eight lives in the State last year.

The overall number of homicides – including murder, manslaughter, infanticide and dangerous driving leading to death – increased by 12.7 per cent to 71. This rise in homicides contrasts to 2015 when the total fell to 63 from 80 in the previous year.

The figures also show a rise in reports of sexual offences – such as rape and sexual assault and a sharp increases in child abandonment, neglect and cruelty.

Aggravated sexual assaults jumped by a third to 2,549 in 2016 marking an overall increase of 8.6 per cent in sexual offences. The number of sexual offences was notably higher in the Dublin area than in the rest of the country.

The figures are compiled from raw data supplied by the Garda. The CSO has in recent years expressed concern at the accuracy of the data, specifically that about one in five crimes reported to the Garda are not recorded for counting.

The rate of dangerous or negligent acts, which includes dangerous driving and driving while over the legal alcohol limit, also increased by more than 50 per cent in cases of abandonment of children, child neglect and cruelty.

While burglary rates in some parts of Dublin have doubled since crime rates began rising with the onset of the recession, the total number of burglaries across the State dropped by nearly a third between 2015 and 2016.

There was also a considerable drop in the number of kidnappings, robbery, extortion and hijacking offences last year. However, robbery of cash or goods rose by more than 50 per cent during the same period.

In its review of crime incidents between 2012-2016, the CSO notes the number of attempts or threats to murder, assault and harassment and sexual offences has continued to climb over the past five years.

While offences connected to weapons and explosive devices dropped by 10 per cent last year, the number of these offences recorded in Northern regions rose from 196 in 2015 to 213 in 2016.

The CSO resumed the publication of recorded crime statistics in June 2015 following a review of the accuracy of An Garda Síochána crime data.

In a note attached to the publication of statistics, the CSO references the ongoing investigation into the number of Garda breath tests carried out between 2012 and 2016. Gardaí claimed two million were carried out but it later emerged the real number of tests was just over one million.

The CSO notes that it took extra care in requesting supplementary information on the 148,000 traffic offences recorded by the Garda when a driver received a summons for prosecution.