Garda communications chief denies he was told to brief against McCabe 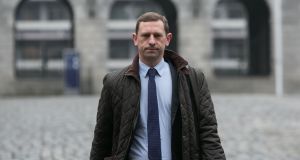 Andrew McLindon, director of communications with An Garda Síochána, told the Charleton tribunal he would have been “appalled” if there had been a smear campaign. Photograph: Gareth Chaney/Collins

The Garda head of communications has said he would have been “appalled” if told the Garda commissioner wanted to brief journalists about sex abuse allegations against whistleblower Sgt Maurice McCabe.

Civilian witness Andrew McLindon, who was appointed director of communications with An Garda Síochána in 2013, a position equivalent to the rank of chief superintendent, was giving evidence on Friday at the Charleton tribunal.

The tribunal is looking at allegations that senior gardaí were smearing the whistleblower to politicians, journalists and others.

The tribunal has heard previously that the Director of Public Prosecutions directed no prosecution after an historic abuse allegation was made against Sgt McCabe in 2006, saying the Garda investigation had found no evidence that a crime had been committed.

Supt David Taylor, a former Garda press officer, told the tribunal he had been instructed by then commissioner Martin Callinan to brief negatively against Sgt McCabe, and that there had been allegations of sexual abuse against the whistleblower.

Michael P O’Higgins SC, on behalf of Supt Taylor, put it to Mr McLindon that two or three weeks into the job, Mr McLindon had got a full briefing on all major and live issues including Sgt McCabe. He suggested Mr McLindon’s reaction was “matter of fact, sanguine” and he did not react outwardly or raise any questions.

“I would have been appalled and highly concerned,” Mr McLindon said. He said he had never been told by Supt Taylor of any instructions to brief negatively against Sgt McCabe.

“I would have been seriously concerned, it would have been anathema to me as a public relations professional,” Mr McLindon said. He said Mr Callinan had a view that Sgt McCabe had not co-operated with the O’Mahoney internal Garda investigation into his complaints.

He said Sgt McCabe’s motivations were not his concern as he was interested in defending the reputation of the organisation. Whether the allegations were true or not, he would have been “appalled” if there had been a smear campaign.

Mr McLindon said a note reading “Start Sgt McCabe 2006”, taken at a meeting in preparation for Mr Callinan’s Public Account Committee (PAC) appearance in January 2014, meant the allegations against Sgt McCabe had been discussed, but he could not recall what had been said.

Mr McLindon said he could, in certain circumstances, provide background information to journalists off the record. Questioned further by the tribunal chairman, Mr Justice Peter Charleton, he said that a journalist would not be bound by confidentiality if given incorrect information by a source. Asked if Sgt McCabe was seen within the force as “a bitter little man”, Mr McLindon said that would be the view held among some. “I couldn’t say that was the view held generally,” he added.