Gardaí to be given power to seize scrambler and quad bikes 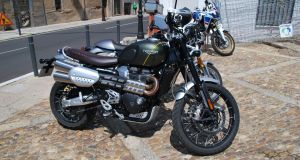 Minister for Transport Eamon Ryan said he was determined to stop the ‘misuse’ of scrambler bikes and quad bikes. Photograph: iStock

Gardaí will have the power to seize scrambler bikes and other off-road vehicles under proposals signed off on by the Cabinet on Tuesday.

Under the plans it will be an offence to use a scrambler or quad bike on public or private land without the permission of the landowner.

Minister for Transport Eamon Ryan said he was determined to stop the “misuse” of the vehicles. He got approval to introduce amendments to a forthcoming Road Traffic (Miscellaneous Provisions) Bill aimed at tackling the “antisocial use” of the bikes and other off-road machines in places such as public parks. Mr Ryan said he hopes the measures would “reduce the risks of death and serious injury”.

The legislation will prohibit the use of such mechanically propelled vehicles (MPVs) on public or private land unless there is permission from the landowner.

The proposed new offence will cover parks, green areas, waste ground and beaches. The use of vehicles on private land where the landowner has given permission will not be affected.

The gardaí will have the power to detain a vehicle where permission has not been given. They will also be able to get a warrant to enter a private premises to remove a vehicle suspected of having being used contrary to the new offence.

A Department of Transport spokeswoman said the timing of the new law being passed “will depend on drafting of the provisions and the availability of Oireachtas time.” She said: “It is the Minister’s intention to pass the legislation as soon as possible.”

A spokeswoman for Mr Ryan said that penalties for the new offence were still being determined in consultation with the Attorney General.

Speaking to  The Irish Times, Mr Ryan said he hoped the legislation would be enacted “within months”.

“It’s been a long time coming, it’s been about two or three years now that the issue has been looked at, with people in their own local parks and communities feeling under threat”.

He said he hoped there would be cross party support as “across all parties, we can see examples where it affects the quality of life for their constituents”.

He emphasised that there was no restriction on the “proper use” of scramblers and quads, but that the legislation had been drawn up “primarily to close a gap in the law” and to target their use “in areas where they’re a threat to other people”.

Minister of State for Transport Hildegarde Naughton highlighted that is already an offence to supply a MPV to a minor whether by sale, lending, gifting or renting. This offence already carries a fine of up to €5,000 as well as the possibility of up to six months in prison. She urged parents thinking of buying a scrambler bike as a gift to reconsider as “sadly our experience to date has been one resulting in serious long-term or fatal injury”.

Minister of State for Law Reform James Browne convened a special meeting of a sub-group of the forum on antisocial behaviour to consider community-based approaches to address the issue of scrambler bikes. The group has been asked to present “practical proposals” on the issue within four weeks.

Man pleads not guilty to charges of rape, attempted rape, and sexual assault