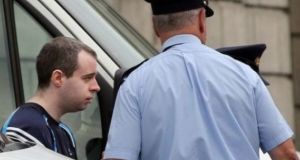 A file photograph of Eric Eoin Marques who has been presented to the FBI after failing to halt his extradition.

An Irish man has been extradited to the US where he is to face charges of being the world’s biggest facilitator of child pornography.

A garda spokesman said Eric Eoin Marques was surrendered to FBI Agents at Dublin Airport and would appear in court in the US on Monday.

He is accused of renting out a vast network of servers to websites such as Lolita City and PedoEmpire which trade in the buying and selling of the most extreme forms of child abuse material. He is also alleged to have profited greatly from this activity, earning €1.15 million over a five-year period.

Marques, who is in his early 30s, had been resisting his extradition and fought a long legal battle which ended in the Supreme Court this week.

He is wanted by US authorities to face charges relating to conspiring to distribute and advertise child pornography, and advertising and distributing child pornography. He is alleged to be owner and administrator of an anonymous hosting site known as Freedom Hosting. He has been in custody since his arrest in August 2013.

His lawyers asked the Supreme Court whether the Minister for Justice was under an obligation to seek reasons from the Director of Public Prosecutions as to why Marques was not being prosecuted in Ireland for the offences he is accused of.

Giving the court’s decision Mr Justice Peter Charleton said the Minister “was not under an obligation to seek reasons from the DPP as to why a suspect is not being prosecuted in Ireland”.

Marques had offered shortly after his 2013 arrest to plead guilty to the charges he is facing if prosecuted in Ireland. The penalties for the charges he faces would be significantly less in Ireland than in the US.