Gardaí seize rifle and €2,300 worth of suspected cannabis from Cork home 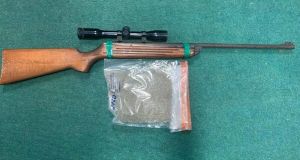 A rife and more than €2,000 worth of suspected cannabis were found during the seizure. Photograph: An Garda Síochána

A man in his 30s has been arrested after a rifle and more than €2,000 worth of suspected cannabis were seized at a home in the town of Cloyne in Co Cork on Sunday.

The items were discovered when gardaí from the Midleton District Drugs Unit carried out a search warrant at a house in Cloyne shortly after 5pm.

The team seized a rifle and scope, and €2,300 worth of suspected cannabis herb along with a weighing scales and some small plastic bags.

A man in his 30s was arrested at the scene and detained at Midleton Garda station under Section 4 of the 1984 Criminal Justice Act but was later released.

A file will be prepared for the director of public prosecutions and the firearm and suspected drugs have been sent for analysis.