RTE news journalists David McCullagh and Eileen Dunne apologised live on air from the 6 and 9pm new bulletins on the channel for breaching public health guidelines at a recent gathering on the RTE campus in Donnybrook. Video: RTE News 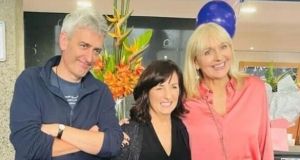 Broadcasters David McCullagh and Miriam O’Callaghan with their retiring colleague (centre) at a gathering in Donnybrook.

Gardaí have started examining how a retirement gathering on RTÉ’s Donnybrook campus in Dublin 4 was organised.

Broadcasters including Bryan Dobson, Miriam O’Callaghan, Eileen Dunne and David McCullagh have apologised for not practicing social distancing for the full duration of the gathering last week after they were photographed standing next to a retiring staff member.

The photographs were posted on a website for retired RTÉ staff and then highlighted in the media, prompting controversy about the gathering.

Mr Dobson later said RTÉ had “vigorously” debated Covid-19 measures on air and that “each of us” should adhere to the public health advice.

RTÉ’s managing director of news and current affairs Jon Williams said he was “very sorry” and there was a “momentary lapse of judgment” when photos were taken at the gathering, which largely adhered to social distancing and other Covid-19 protocols.

The National Union of Journalists (NUJ) criticised the gathering, saying it should not have taken place, while Taoiseach Micheál Martin said it was “disappointing” and “not helpful” that a number of prominent RTÉ presenters were seen not observing social distancing guidelines.

Garda headquarters on Saturday said that when “enquiries” currently underway into the matter were completed, legal advice would be sought about the need, if any, to progress the matter further.

“An Garda Síochána is carrying out enquiries, focused on the organisers, into an alleged event as described and the advices of the Director of Public Prosecutions will be sought in respect of any further actions to be taken,” it said.

The Garda added the “personal responsibility” relating to attending an event or social distancing and wearing of masks once at an event were “public health guidelines are not penal regulations”.

The gathering took place at a reception area in RTÉ, with those present standing socially distanced in the area and up the stairs leading off it. Some of those who appeared in photographs with Ms Collins were walking through the reception area at the time and stopped when they saw the gathering.

At present Garda investigators were trying to determine if the gathering for Phil Collins, who was retiring after 40 years at RTÉ, met the criteria of being “an event” under the Covid-19 regulations.

Should it progress to a criminal inquiry, those who attended will not be part of that investigation as the only criminal offence that might arise relates to those who organise “events”.

Lapses in adherence to public health advice, such as not socially distancing when group photographs were taken, will not form part of any Garda enquiries or possible future investigation as the force has no role in enforcing public health advice. It only has an enforcement role relating to penal matters, where a criminal offence arises if Covid-19 rules are breached.