CCTV showing missing person Jon Jonsson in Dublin on the day of his disappearance has been aired on Crimecall. The 41-year-old father of four and taxi driver from Iceland vanished on February 9th after leaving a north Dublin hotel. 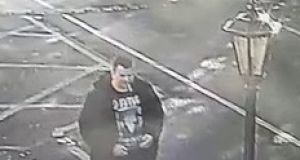 Jon Jonsson was picked up on CCTV at the entrance to Highfield Nursing home, which is immediately adjacent to the Bonnington Hotel.

Detectives have made a fresh appeal to the public for help in finding an Icelandic man who went missing in Dublin two weeks ago.

Gardaí have said searches for Jon Jonsson, by the Garda and his family, had yielded no clues about what has happened to him or where he may have gone.

The 41-year-old father of four and taxi driver from Iceland vanished on February 9th after leaving a north Dublin hotel where he had been staying. He had come to Ireland with his fiancée the previous day for a poker tournament and short holiday break in Dublin.

The couple was staying at the Bonnington Hotel, Whitehall, north Dublin. He left the hotel on foot on Saturday the 9th and was recorded by a security camera walking on a pavement about 200m away passing the entrance to a nursing home adjacent to the hotel.

Beyond those images, which have now been released as part of the fresh public appeal, gardaí have no information about where he went or where he is now. He had never been to Ireland and has no friends or family here.

Mr Jonsson had never gone missing before and his family are now so concerned they have travelled to Dublin to carry out their own search and make appeals through the media.

“There are serious concerns for his safety at this stage as he has been missing for over two weeks,” said Insp Mick Mulligan of Ballymun Garda station which is conducting the missing persons investigation.

He was speaking to the media on Sunday morning outside the hotel close to the spot where Mr Johnson was last picked up on CCTV cameras.

“We’ve nothing to indicate anything sinister may have happened to him,” Insp Mulligan added.

“We’re appealing now through the media to the public at large for any information in relation to this disappearance.”

Insp Mulligan added a number of large scale searches, involving gardaí on foot, the Garda Dog Unit and the force’s helicopter had been conducted in large green spaces in the general area where the hotel is located.

“The family has also conducted a search in the area and we have liaised with our international colleagues and [no information] has come to the fore,” Insp Mulligan said, adding anyone with information could contact the Garda confidential line on Ballymun station.

“We liaised with the family last night and any leads that come in today will be followed up on.”

He said there had been sightings, of people of similar build, in the area and all of those would be followed up on.

“Our concern now is that it is unusual for him to go missing without making contact with family either at home or here with him,” Insp Mulligan said.

He said Mr Jonsson had left the Bonnington Hotel on the day he disappeared with only the clothes he was wearing and his payment cards. However, his passport, suitcase and other clothes were left in his hotel room and his bank accounts have remained untouched since his disappearance.

Mr Jonsson had come out of the hotel and onto the Swords Road and walked in a northerly direction; towards the junction with Collins Avenue close to Whitehall church.

He was picked on CCTV at the entrance to Highfield Nursing home, which is immediately adjacent to the Bonnington Hotel. However, having been recorded by those cameras about 200m from his hotel, there are no further confirmed recordings or sightings of him. And while a number of people have called the Garda and reported that they have seen people matching the missing man’s description, none of these possible sightings has been confirmed.

In reply to queries, Insp Mulligan said while the Garda could not rule out the possibility Mr Jonsson had left the country there was no information to suggest he had.

“He left his passport behind him and his mobile phone but he is in possession of his credit cards. We’ve inquired through our international colleagues and there’s been no activity on that bank account,” he said.

“We have done a detailed search of this area and we’ve made inquiries with other hotels, the airport, Dublin Port and that has turned up negative for us. So we are asking the public for their assistance with this.”

Mr Jonsson’s fiancée has told gardaí they arrived in Dublin the day before he went missing. She went to the hotel bar for a coffee on the following day and when she was at the bar he left the hotel.

Mr Vihelm added no money had been found in his brother’s hotel room. Neither he nor any of his family had any idea why Mr Jonsson would leave the hotel or why he would go missing. Mr Vihelm added his brother had no history of mental illness or taking medication and his disappearance was a mystery to the family.

“He had never gone missing before. This is very unlike him. He works as a taxi driver back home, if he works late or something he always reports back to his family or fiancée. He is a father of four children. This is out of character.”

Anyone who has seen Mr Jonsson or who can assist in locating him is asked to contact Ballymun Garda station on 01 6664400, the Garda Confidential Telephone Line 1800 666 111, or any Garda station. A gofundme page has been set up to help with the rescue effort.