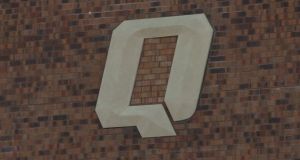 The latest arrests in the major cross-border inquiry took place on both sides of the Border. Photograph: Liam McBurney/PA Wire

Four people have been arrested for questioning over the campaign of intimidation and violence against the directors of Quinn Industrial Holdings (QIH).

The four latest arrests in the major cross-border inquiry took place on both sides of the Border; three arrests were made by the PSNI and one by the Garda.

The cross-border inquiry was intensified with the abduction and torture of QIH director Kevin Lunney last September.

Cyril McGuinness, also known as Dublin Jimmy, was regarded as the leader of the Border gang that has been attacking and intimidating the QIH executive team in recent years.

McGuinness, a Dubliner who had long settled in Co Fermanagh, died of a cardiac event last November when English police raided a safe house he was staying in near Buxton in Derbyshire.

The raid was carried out at the same time the PSNI and Garda raided a series of addresses on both sides of the Border in connection with the attack on Mr Lunney.

The arrests on Thursday specifically relate to the abduction, assault and torture of Mr Lunney on September 17th close to his house in Co Fermanagh as he was driving home from work.

He was being detained under Section 50 of the Criminal Justice Act which allows for the detention of suspects in gang-related crimes for up to seven days without charge.

The three suspects arrested in Fermanagh by the PSNI include two men aged 23 and 61 years and a woman aged 61 years.

They were being questioned in Omagh police station on suspicion of conspiracy to kidnap, conspiracy to cause grievous bodily harm with intent and assisting offenders.

Chief Supt John O’Reilly of the Garda’s Cavan-Monaghan division said: “Today’s arrests demonstrate An Garda Síochána’s ongoing commitment, working closely with the Police Service of Northern Ireland, and is a further significant step to ensuring that the perpetrators of this vicious attack will be brought to justice.”

Det Chief Insp Julie Mullan from the PSNI’s Criminal Investigation Branch said: “The arrests today show the close working partnership between the PSNI and An Garda Síochána and our determination to bring those responsible for this heinous crime before the courts.”

Separately to the four arrests on Thursday, a number of men are currently before the courts having been charged with offences related to Mr Lunney’s abduction.

For almost a decade executives and companies involved in the management or acquisition of assets formerly owned by former billionaire Sean Quinn have been subjected to a campaign of violence. Mr Quinn has condemned the violence and has said that those carrying it out were not acting in his name.

Mr Lunney (50), a father of six, was abducted close to his home in Co Fermanagh on September 17th as part of the ongoing campaign of violence and threats.

His leg was broken and the letters QIH were carved into his chest during the 2½-hour ordeal before he was dumped on a roadside in Co Cavan.

A major Garda-PSNI joint inquiry has been under way since the attack, a major escalation of the campaign against the executives. Gardaí believe suspected gang leader Cyril McGuinness fled to Derbyshire to evade the investigation.

Garda sources said McGuinness had taken documents, laptops and phones with him, all of which were recovered by Derbyshire police and have since been undergoing analysis by the PSNI.