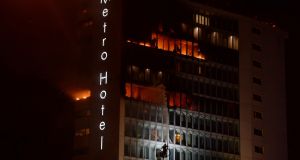 The Metro Hotel, Ballymun: Dublin Fire Brigade’s chief officer said planning, and the performance of some 60 firefighters who tended to the blaze, had ensured a successful operation, not luck. Photograph: Alan Betson / The Irish Times

Dublin Fire Brigade’s chief officer has rejected claims the service was “lucky” to control a recent hotel fire in Dublin.

Pat Fleming has told Dublin City Council that far from being fortunate, the fire was brought under control because of pre-planning and the professionalism of his staff.

In the aftermath of the fire at the Metro Hotel, Ballymun, north Dublin on March 21st, Siptu was critical of Dublin Fire Brigade, claiming its levels of training and the standard of equipment available to staff fell far short of what was required.

The union said it believed the service had come through the fire successfully only because it had been lucky, adding training for tackling fires in high rises was needed.

However, appearing before a meeting of Dublin City Council on Thursday, Mr Fleming said he was disappointed at the suggestion the service had been lucky.

He told councillors the hotel was one of about 1,200 buildings in Dublin pre-assessed by Dublin Fire Brigade in the event a fire broke out there. That planning, and the performance of some 60 firefighters who tended to the blaze, had ensured a successful operation.

“It wasn’t luck, this was a very serious and complex fire,” Mr Fleming said. “The only lucky bit was that people had evacuated fully. The most important thing is that people react when they hear the fire alarm.

“There was some water damage but we saved the building. And nobody died.

“Were we lucky? No, we weren’t lucky because if we were the fire would have stayed in the first compartment [of the building] where it started; it would never have got out. Or even if it got out, it wouldn’t have travelled to another floor.”

He believed “burning embers” had spread the fires between the 10th and 13th floors.

Mr Fleming said high-rise buildings were not necessarily more dangerous from a fire safety perspective. “You are at much higher risk and you are much more likely to die in your own house, a three-bedroom semi or whatever, than you are in an apartment.”

A Garda-led investigation continues into the Metro Hotel fire.