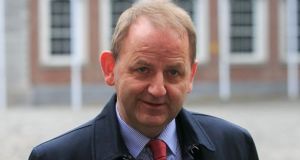 The former deputy head of the Garda Press Office has said he never heard of there being a smear campaign against Sgt Maurice McCabe or of any such campaign being ordered by former commissioner Martin Callinan.

Supt John Ferris, who is now head of Garda Corporate Communications Office, told the Charleton tribunal he was never told about any instructions to conduct a smear campaign against the sergeant and never heard anyone in the Garda Press Office talk about such a campaign.

The tribunal was established to investigate claims that senior Garda management ordered a smear campaign against Sgt McCabe arising from his whistleblowing activities.

The tribunal has begun a new module where it is hearing evidence about a claim by the former head of the Garda Press Office, Supt Dave Taylor, that he was ordered by Mr Callinan to conduct a smear campaign against Sgt McCabe.

Supt Ferris said that he was the deputy head of the press office when Supt Taylor took over the lead role in July 2012. He said the two men shared an office for about three months but that one morning he arrived in to find his desk “upside down and in three parts” on the office floor.

“I felt this was very disrespectful.” He was told he was being moved to a new office, and he accepted this as Supt Taylor was his superior officer. From then on the two men, he said, had a “purely professional” relationship.

He told Tara Burns SC, for Supt Taylor, that, “to be honest, I found Supt Taylor, your client, to be very difficult.”

He said Supt Taylor wanted the Garda Press Office to “pump out” press releases “if there a lawnmower stolen from a house in Malahide”. Supt Ferris did not agree with this.

Paul Moran, a former Garda superintendent and head of the Garda Press Office, said he believed Supt Taylor was “bitter” about having been moved from the office.

Mr Moran, who took over from Supt Taylor in June 2014, said the two men met later for coffee and he formed the impression, from what was said and from Supt Taylor’s “body language”, that he was upset about having been moved by the then acting commissioner, Noirín O’Sullivan, and was “bitter”.

He said it was his practice when contacted by journalists to refer them to the office and in this way everything was recorded on the centralised system.

If he answered the journalists’ questions, then the interaction would not be “captured” by the data system used by the office. He said he formed the impression from comments made to him that his predecessor may have operated differently.

The chairman, Mr Justice Peter Charleton, said the “thrust” of what was being told to the tribunal was that Supt Taylor was bitter about Ms O’Sullivan in particular and how she had removed him from his role in the Garda Press Office, and that he blamed her for being removed from a job he very much enjoyed.

Mr Moran said that Supt Taylor had liked the job and was upset at being moved, but may not have been forthcoming in his comments to him, the witness, as he was viewed as being close to Ms O’Sullivan and her “mouthpiece” as head of the Garda Press Office.

The tribunal has adjourned until Thursday, when it will hear from a new witness.