Fire breaks out in Bottom of the Hill pub in Finglas 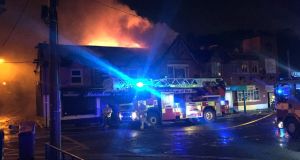 Emergency services were called to a fire in Finglas village in the early hours of Thursday morning.

The fire broke out in the Bottom of the Hill pub, on Finglas Main Street, and the cause of the blaze is currently unknown.

In a post on Twitter, Dublin Fire Brigade said the “large” fire appeared to start in an office above the pub, and commuters should expect traffic delays in the north Dublin area.

The scene is being preserved for an examination later today.

In a statement the Garda Press Office confirmed units had attended the scene of the fire.

“There were traffic restrictions in the area for a period of time but they have now been lifted. No one was injured in the incident,” a Garda spokesman said.

Gardaí are appealing for anyone with information on the incident to contact Finglas Garda Station on 01 6667500.

Kieran Green told witness he wanted to tell her ‘all about it’, Garda tells court