Fines for Covid-19 breaches can influence behaviour but will people pay them? 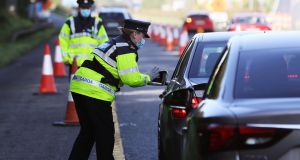 Under new measures, those found engaging in non-essential travel more than 5km from home or refusing to wear a face mask in designated areas will likely face fines of up to €500. Gardaí will also have the power to issue €1,000 fines to organisers of house parties. File photograph: Brian Lawless/PA Wire

Another month, another new set of Covid-19 laws.

Starting in March 2020 when the Health Act 2020 was introduced, the Irish public has been subject to a sometimes bewildering array of guidelines, restrictions and penal provisions.

The latest set of powers, which were decided by Cabinet on Tuesday, will allow gardaí issue fines for breaching the Level 5 restrictions due to come into effect on Thursday morning.

Those found engaging in non-essential travel more than 5km from home or refusing to wear a face mask in designated areas will likely face fines of up to €500. Gardaí will also have the power to issue €1,000 fines to organisers of house parties.

Under previous versions of the restrictions, gardaí were able to prosecute event organisers and people engaged in non-essential travel in the District Court, with convictions resulting in up to six months in prison and a €2,500 fine.

However, these provisions were viewed by officials as overly draconian and were rarely enforced anyway. We can expect the lower, on-the-spot fines to be issued more generally.

But are fines an effective way of altering public behaviour? That is a debate which has been ongoing among behaviour scientists and health and public health experts since the start of the pandemic.

According to Dr Pete Lunn, who heads the Economic and Social Research Institute’s Behavioural Research Unit, people tend to overestimate the effectiveness of fines as a deterrent.

“Most people who break the rules are not actually undertaking some cost-benefit analysis where they’re taking into account the likelihood of getting caught and the size of the punishment.”

This is especially so with Covid-19 regulations, he said, because, for various reasons, only a small number of rulebreakers are actually going to be caught.

“If you think about how many rules we’re taking about and how much behaviour is involved, monitoring is almost impossible.”

Nevertheless “a degree of punishment” can play an important role as a “social signal”, Lunn says.

“It helps the people who are making sacrifices to see rulebreakers getting picked up and punished.”

In this regard the gardaí have a tightrope to walk. Seeing some people punished for flagrant rulebreaking will help public solidarity but any overreach could have the opposite effect.

Evidence of this has already been seen in the UK and France where Covid-19 fines systems have been in place for months.

Early in the pandemic French police were criticised for fining homeless people for failing to stay indoors. In the UK hundreds of prosecutions for breaches had to be dismissed because of a misapplication of the law.

In some Asian countries, large fines and other draconian punishments have formed a central part of state responses to Covid-19 and have been credited by many as playing an important role in the region’s successful response to the virus.

In Singapore, for example, officials use mobile apps to monitor the movements of quarantining citizens, with $10,000 fines for those who are found outside their homes. In parts of Indonesia, rulebreakers can be forced to dig the graves of Covid-19 victims.

Such measures are unlikely to work in a liberal democracy such as Ireland. Instead “voluntary behaviour will be overwhelmingly the most important factor,” says Lunn. “Fines are only ever going to be a piece of the puzzle.”

The gardaí who will be responsible for issuing these fines have so far expressed mixed views on their introduction.

Like other Covid-19 measures, the fines will only be issued when other options have been exhausted. Gardaí will be encouraged to utilise the “Four Es” approach: engage, explain, encourage and, as a last resort, enforce.

This means a huge amount of discretion will be involved in the issuing of fines. One Garda district may see large numbers of fines handed out, compared with another where members prefer a softly softly approach.

“Management is obsessed with numbers. If they see one district handing out loads of fines and us only handing out a few they’re going to be coming down on one of us,” one member commented.

Some members have also questioned how gardaí fine house party organisers if they are not permitted to enter the houses. The Association of Garda Sergeants and Inspectors suggested people could avoid being fined by simply refusing the answer the door to gardaí.

Others welcomed the fact that fines mean they can get back to what one garda termed, “real policing”. Over the last several months gardaí have been expected to man checkpoints and inspect premises without any enforcement powers to back them up, leading to frustration among some members.

“You’re called to a massive party and all you can say is, ‘lads would you not consider going home, what about you’re poor grannies etc etc’. And they can stand there and tell you to mind your own business,” said another garda. “At least now there is a threat hanging over them.”

But what is the point of a fine if no one is going to pay it? We already know the Irish justice system has a problem in enforcing fines.

Those who refuse to pay the on the spot fines will likely end up before our already overburdened and backlogged court system which has a poor track record in recovering unpaid fines.

The introduction of Fines (Payment and Recovery) Act 2014 means it is very difficult to send someone to prison for failing to pay a fine.

This had the positive effect of lowering prison numbers but led to a three-fold increase in non-payment of fines.

We know from elsewhere that Covid-19 fines are unlikely to be much different. According to UK data released last month only half of the fines issued by police for breaches of Covid-19 rules since March have been paid.