Opinion: There were clearly sympathisers with the ‘armed struggle’ at all levels of southern society 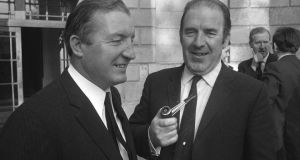 Charles Haughey with Neil Blaney in 1970 at the Arms Trial.

It has taken a long time for the truth to emerge but the finding of the Smithwick Tribunal that someone in Dundalk Garda station colluded with the IRA in the murder of two RUC police officers is still shocking.

The immediate political fallout has been dominated by the cold-hearted response of Sinn Féin president Gerry Adams but he is not the only one who needs to take stock in the aftermath of the tribunal’s report.

It should prompt a much wider and thorough examination of conscience about how the institutions and indeed the people of this State responded to more than a quarter of a century of violence that took place mainly on the other side of the Border.

If the current threat from dissident republicans is to be defeated and the institutions established by the Belfast Agreement are to thrive we need to understand what went wrong in the past. That doesn’t mean more long and expensive formal inquiries but an honest appraisal of what happened and why.

The IRA campaign could never have gone on for so long and inflicted as much suffering as it did if a significant number of people on the southern side of the Border had not been prepared to collude or at the very least turn a blind eye to its activities.

How else could IRA assassination squads have managed to flit over and back, not just to launch attacks on the security forces in the North but to engage in a calculated campaign to murder the sons of Protestant farmers living on the Fermanagh side of the Border.

Porous Border
The Garda and the Army generally did their best to block the porous Border but the resistance by the courts and a broad swathe of political opinion to the introduction of normal extradition procedures between Ireland and the United Kingdom for almost two decades facilitated the continuation of murder.

Even when extradition was introduced in the late 1980s, in the aftermath of the Anglo Irish Agreement, it took an inordinately long time for the system to become effective.

The IRA clearly had sympathisers at all levels of society in the Republic, otherwise it could not have continued to wreak havoc for so long. The full story about that has yet to be told.

A disturbing book by respected academic Henry Patterson, Ireland’s Violent Frontier: the Border and Anglo-Irish Relations During the Troubles, published at the beginning of the year, addressed some of these issues but it received little media attention.

Writing in this paper yesterday DUP MP Jeffrey Donaldson claimed that Capt James Kelly, an Army intelligence officer, sought to import guns for the IRA on the orders of the government in 1969.

While it is undoubtedly true that Kelly was acting on the orders of two ministers, Neil Blaney and Charles Haughey, the available evidence suggests they were defying the authority of the then taoiseach, Jack Lynch, who was too weak to confront them until the situation threatened to get out of hand in April 1970.

One way or another, though, there is no doubt that powerful figures in the government and outside it assisted in the creation of the Provisional IRA in 1969.

While the institutions of the State after that date tried to clamp down on IRA activity they never managed to get on top of it. The violence did not end until the Provisional IRA declared its first ceasefire in August 1994.

Thankfully, things have moved on since then with a powersharing executive in the North and increasing co-operation between the authorities on both sides of the Border and between Ireland and the UK.

Many aspects of the Troubles, including the involvement of the British state in atrocities such as Bloody Sunday and collusion with loyalist paramilitaries have been explored in official inquiries. The Smithwick report has now put the spotlight on the State’s response south of the Border.

One of the main problems is that, as the Smithwick investigation showed, there is there is little or no prospect of getting the IRA to come clean about what it has done, never mind getting some form of genuine repentance.

On his last visit to Ireland the late Kader Asmal, who led the Irish Anti-Apartheid Movement for 30 years and then served as a minister in Nelson Mandela’s government ,was asked about the issue of truth commissions. At a seminar in TCD, John Bowman asked Asmal if in the light of his experience in South Africa, where a truth commission had been established, and his extensive knowledge of the Irish situation, he thought such a commission here would serve a useful purpose. Asmal’s answer was an emphatic no.

At this stage it would probably be best for politicians and institutions to focus on the future. That doesn’t mean the past should be forgotten or its lessons ignored but formal inquiries cannot continue forever. As Queen Elizabeth said in Dublin Castle: “We should bow to the past but not be bowed by it.”

Senator Paul Coghlan of Fine Gael has suggested that the best response to the Smithwick report would be for the Garda and the PSNI to set up joint offices along the Border to combat crime such as diesel laundering.

In his report Judge Peter Smithwick called for procedures to be put in place to allow for the structured and regular exchange of information and intelligence between the two forces. Such an initiative would be a small sign that we have learned something from the past.