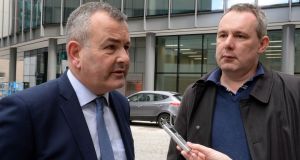 Mr Brabazon was elected with 34 votes against the 26 votes secured by Independent councillor and homeless campaigner Anthony Flynn, the only other councillor to contest the role.

Mr Flynn got an early and unexpected boost to his campaign on Monday afternoon when the council released a statement announcing his election as Lord Mayor.

Some six minutes afterwards a correction was issued by the press office, dashing Mr Flynn’s hopes. Fellow Independent councillor Christy Burke, in nominating Mr Flynn, said while he imagined this was a genuine mistake, Mr Flynn was “on his way to the Mansion House to pick up the keys”.

But it was not to be. While Mr Flynn’s nomination was supported by Sinn Féin, Fine Gael, and most Independents, Mr Brabazon, who was deputy Lord Mayor, had the support of the ruling alliance on the council.

Fianna Fáil, the Green party, Labour and the Social Democrats formed a ruling group on the council following the local elections last year. As part of this agreement the groups rotate the role of Lord Mayor between them for the five year term of the council.

Mr Brabazon will hold the the office until June 29th, when a councillor from one of the other ruling parties is expected to be elected.

Speaking in the council chamber before his election, Mr Brabazon said he wanted to address newspaper reports published on Monday in relation to an article he had written in 2015 on gender quotas and the role of women in politics.

In the article in his local paper the Northside People he criticised the legislation bringing in gender quotas and said in politics: “we should want real women with real life experience of the education system, the workplace, childbirth, childcare, managing money in tight situations and general life.”

Mr Brabazon said he had apologised for this comments at the time and wanted to do so again.

Newspaper reports on Monday “could be taken to indicate that it is my belief that people who didn’t have children should be excluded from politics”. He said this was not his view.

He said his view on gender quotas had changed and he now saw them as “very useful” in bringing women into politics.

In addition to the election of mayor, five new councillors, four women and one man, were co-opted to replace four men and one woman who had been elected to the Dáil.