New gardaí bring to 14,467 the number of sworn members in the force 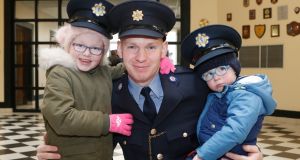 Graduating at the Garda College in Templemore was Garda Michael O’Grady, Newmarket on Fergus, Clare with his children Caitlin(6) and Darragh (3). Photograph: Liam Burke/Press 22

Garda Commissioner Drew Harris has signalled that a new drive against drug dealing is to commence later in the year which will extend far beyond the Garda’s national and local drugs units.

He added that the money spent by casual drug users on illegal drugs was strengthening drugs gangs, who were often also involved in crimes like human trafficking, sexual slavery and child abuse.

While local Garda drug units are already situated across the Republic, and have been for many years, Mr Harris said drug dealing had spread into all parts of the country and was no longer solely an issue in urban areas.

Addressing a class of 201 new Garda members at their passing out ceremony at the Garda College, Templemore, Co Tipperary, on Friday he said all of them would be involved in his new plans to redouble the Garda’s efforts this year to tackle the drugs trade.

The new gardaí bring to 14,467 the number of sworn members in the force – the highest level since it peaked in size at more than 14,500 in 2009 following an accelerated recruitment process.

Recruitment to the force was stopped as a result of the economic crash and the Garda College was mothballed for a period.

When the next class of recruits passes out at the college later this year, the previous record number will be surpassed and there will be more gardaí than at any time since the foundation of the State.

Mr Harris told them that “so-called street-level drug dealing is becoming more prevalent and is no longer confined to city and urban areas”.

“In the coming months, we will be introducing a major operation and every one of you will have a part to play in it. But we won’t solve this problem alone. This is a societal issue requiring a societal response. Tackling this will not be confined to our drug units - every Garda member, including you, will contribute.”

He added the Commission on the Future of Policing had recognised that other State agencies had a role to play in working collectively to tackle drugs. And people “who think their use of so- called casual drugs has no real harmful effect need to think again”.

“There is no such thing as consequence-free drug taking. It is not an abstract issue that can be forgotten about the next morning or excused,” he said.

“It results in addiction, misery and death. Every cent they spend on drugs helps to solidify the power of crime gangs who terrorise families and communities.

“Every cent they spend on drugs supports gangs involved in the most terrible of exploitation and violation of the human rights of our fellow human beings through human trafficking, sexual slavery and child abuse.

“For communities, this is not just a criminal act, but a quality of life issue, particularly when it takes place in public. This is happening in our towns and villages and it has to stop.

Mr Harris welcomed the growth of the force. And he pointed out that 2,976 Garda staff, or civilian workers, were not part of the force but brought skills required for modern policing and also allowed gardaí to get away from administrative jobs and fill frontline policing roles.

Some 602 sworn Garda members have to date been freed up from desk jobs as part of the ongoing civilianisation process.

Mr Harris said that when the number of sworn members reached a target of 15,000, it would be an ideal time to reflect on policing demands and assess where these members should be deployed and to decide if any additional skills were required in the organisation.

Asked what the growing demands on policing in the State were, Mr Harris said: “There’s a number of things that have happened over the last 10 years. We’ve seen a growth in cyber crime, a growth in fraud and low level fraud.

“We’ve also seen a growth in attacks on the vulnerable; be it domestic abuse or serious sexual assault and human trafficking.

“These are serious crimes requiring specialist resources and what I have to look to is what the next five to 10 years might look like and how we resource appropriately; not only in numbers but also in terms of the skills within the organisation.”