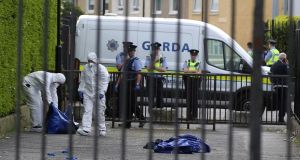 The scene of the fatal shooting in the Marigold Road area of Darndale. Photograph: Sam Boal/Rollingnews.ie

A man shot dead in north Dublin yesterday afternoon outside a primary school and adjoining church was wheeling his baby son in a buggy at the time.

Jordan Davis (23) was shot in the head in a laneway at Marigold Road, Darndale, at 4pm in a suspected drug-related attack. His son, who he was bringing for a walk at the time, is aged four months.

The gangland-style shooting of Mr Davis came less than 24 hours after his friend Sean Little, from Kilbarrack, Dublin, was shot dead near Walshetown in north Co Dublin.

Gardaí believe Mr Little (22) was killed by a crime gang based in Finglas, north Dublin, because it feared he wanted to avenge the fatal shooting of his friend Zach Parker (23) in Swords, north Co Dublin, in January.

The killings of Mr Little and Mr Davis followed a botched murder attempt in Mulhuddart, west Dublin, on Tuesday night as part of a localised feud there.

Minister for Justice Charlie Flanagan condemned the violence, saying it would not be tolerated.

“I am extremely concerned about the three shooting incidents that took place in Balbriggan, Mulhuddart and Darndale in the past 24 hours,” he said.

“An Garda Síochána are now conducting full inquiries into the circumstances surrounding these incidents. I would appeal to anyone who has information which could help to please come forward to them as soon as possible.

“Any information, no matter how small, could play a vital part in bringing the perpetrators of these acts to justice.”

The killings of Mr Little and Mr Davis come at a time when gardaí are trying to contain the Kinahan-Hutch feud and a separate intense gangland dispute in Drogheda, Co Louth. There are also worsening gangland feuds in Finglas and in Mulhuddart, west Dublin.

Fianna Fáil spokesman on justice, Jim O’Callaghan, said the attacks were acts of “depraved violence” that Irish society could not accept.

“The prevalence of gun-related violence has continued to intensify, and it is essential that all possible resources are provided to protect the public,” he said.

Mr O’Callaghan called on the Minister for Justice to review whether an “extension of resources” could be offered to the Garda.

Senior gardaí are concerned that a major drive is now under way to control overtime expenditure at a time when special policing operations, which are funded by overtime, are badly needed to control armed gangs.

He questioned why Stepaside was being prioritised over the northside of Dublin, which, he said, needed extra Garda resources urgently.