Drugs seized at Electric Picnic within minutes of gates opening

Cocaine, Ketamine, LSD and MDMA found by gardaí at festival 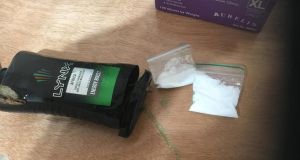 Drugs were seized at Electric Picnic within minutes of the festival opening on Thursday, according to gardaí in Co Laois.

Cocaine, Ketamine, LSD and MDMA were uncovered by gardaí, who have posted a number of photographs of the illegal substances on social media.

The photographs show how revellers concealed the drugs in various items including inside a bottle of Lynx bodywash.

Posting on The Garda Síochána Laois Offaly Facebook on Thursday, gardaí said: “Gates opened at 4pm today and within minutes a number of seizures of illegal drugs have been made.

“Gardaí are carrying out searches and are reminding people attending that any seizures made will have consequences for the individual. Keeping people safe and free from harm is important.

“Cocaine, Ketamine, LSD, MDMA have been seized so far today.”

Over 57,000 people are due to descend upon the Stradbally estate this weekend with headline acts including The Strokes, Hozier, Florence & The Machine and The 1975.